After a subdued start to the week due to the Easter Monday holiday, investors found some support on the early signs that the new COVID-19 cases are easing in some countries, in addition to some of the biggest oil production cuts in history.

Yet, it was another week of indecisiveness as investors’ attention switched to the earnings season to get a sense of the damage caused by the pandemic while monitoring any developments that could indicate a return to “normality”.

The historic OPEC deal failed to lift crude oil prices, which are being crushed by the demand crisis. The OPEC and non-OPEC Ministerial meeting reaffirmed the continued commitment of the participating producing countries in the Declaration of Cooperation.

OPEC+ is also relying on the international cooperation of the G20 countries in stabilising the energy markets. Overall, the agreement reflects the coordinated commitment and is bringing some positive reassurance on the long haul.

However, various oil forecasts continue to paint a dire outlook for oil demand amid travel bans and lockdowns during the pandemic.

On the supply side, weekly reports have shown a significant increase in crude oil inventories. During the week, WTI traded at the lowest level since the beginning of the year at 19.20, despite the agreement. 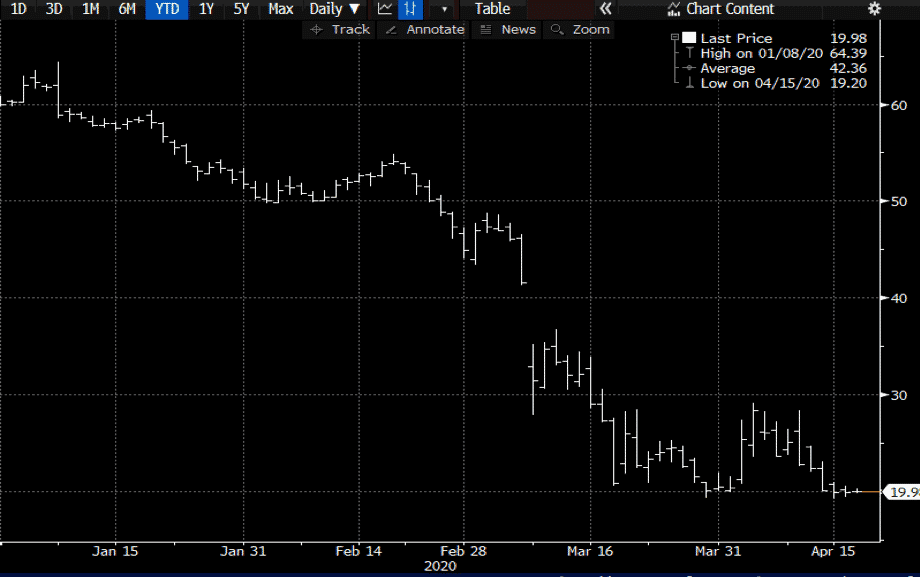 The International Monetary Fund (IMF) has predicted in its 2020 World Economic Outlook that the economic impact of the COVID-19 pandemic might result in the “worst recession since the Great Depression”.

The IMF expects the world economy to contract by 3% in 2020 due to the various forms of lockdown seen across the globe. The magnitude and speed of the collapse resulting from unexpected quarantines and social distancing measures necessary to fight a pandemic is unprecedented, and the contraction looks far worse than the last recession. 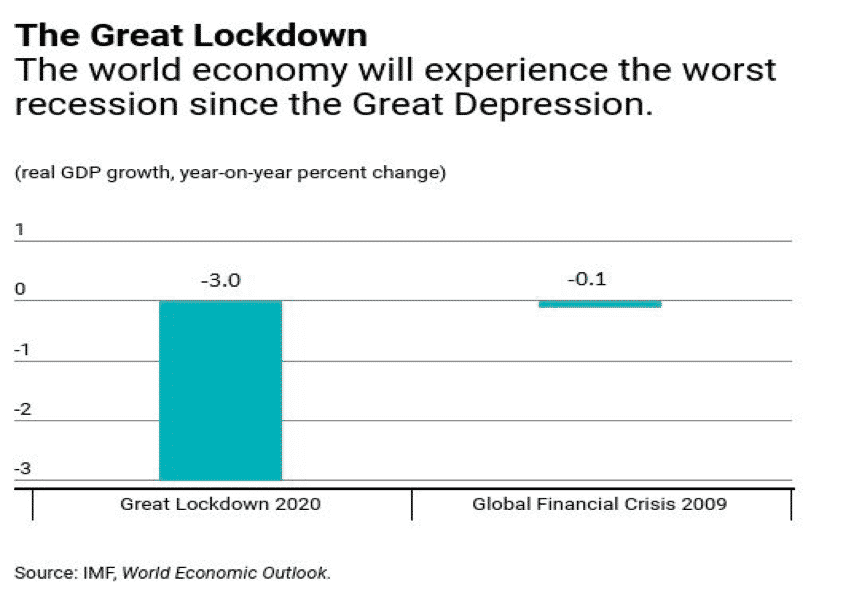 In Australia, the IMF predicted a contraction of 6.7%, which marks the worst since the Great Depression in 1931. However, the IMF is also predicting an optimistic V-shaped recovery in 2021. 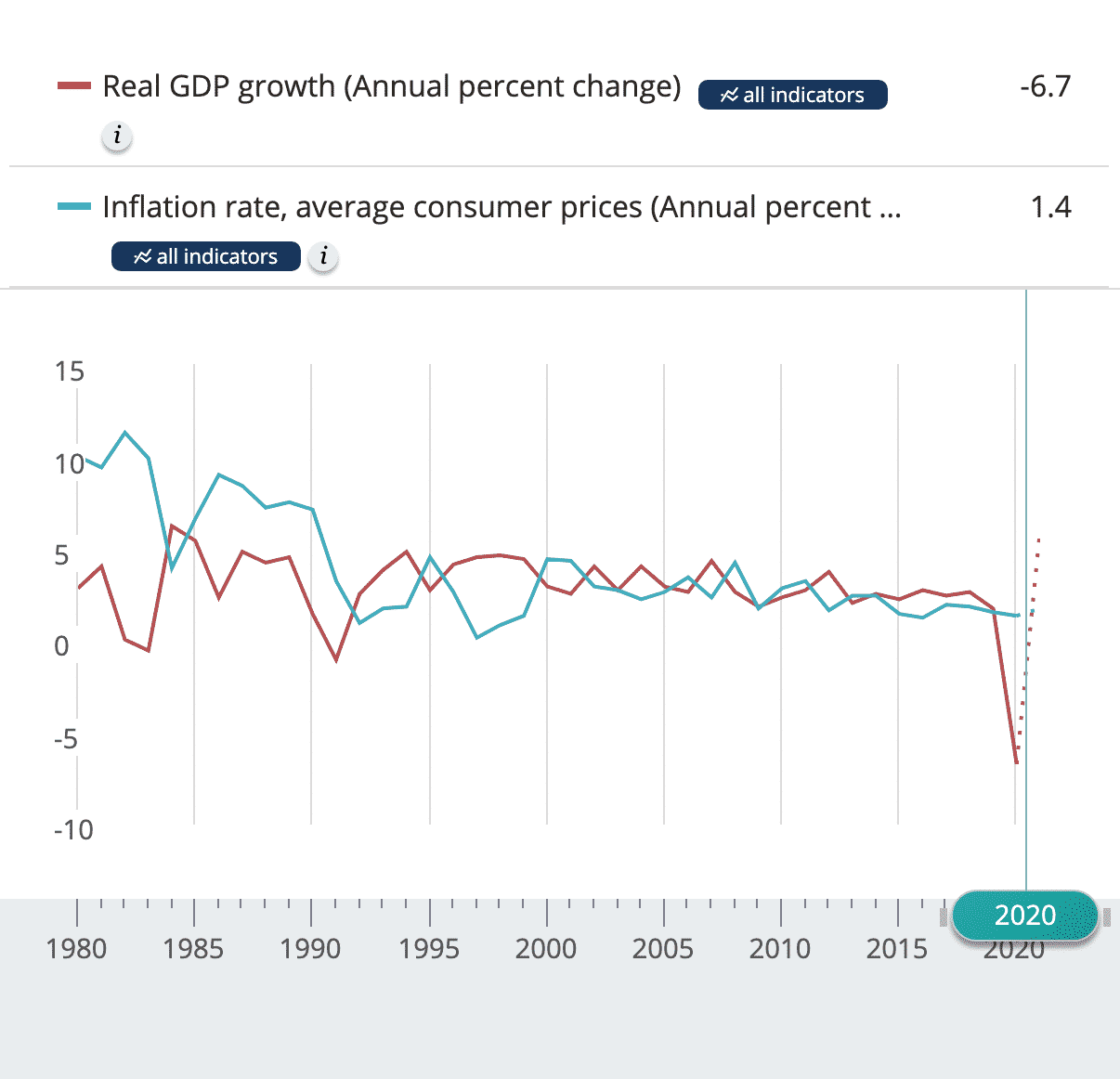 On the earnings front, banking giants reported their first-quarter earnings. As widely expected, banks like JP Morgan, Wells Fargo, Citigroup, Bank of America, Goldman Sachs and Morgan Stanley all reported a significant drop in profits tied to the pandemic.

While the share price of most of those banks dropped by more than 10% this week, Goldman Sachs and Morgan Stanley flared better compared to their peers, with a fall of 5% or less.

As investors are bracing themselves for dreadful figures, economic data in China is showing some early signs of recovery:

On the downside, GDP and Retail Sales contracted more than expected by -6.8% and -15.8%, respectively. The overall data does not paint a bright outlook for China but does provide some reassurance that the economy is picking up slowly.

China has only recently started to lift lockdown restrictions, and investors will likely continue monitoring economic releases in the upcoming weeks and months for signs of a promising recovery.

In the United States, most economic releases are showing record falls or figures seen a decade ago, reiterating that the global pandemic is having a much-worse effect on the US economy than the financial crisis.

Employment reports were the main economic events on the Australian calendar. Surprisingly, the pandemic-induced crisis does not seem to have hit hard the labour market in March at first glance.

The jobs market added 5.9K jobs, and the unemployment rate came better-than-expected at 5.2% compared to the forecasted 5.5%. While the unexpected rise can partially be justified by the growing demand by supermarkets and associated supply chains, the data is not a full representative of the whole month.

The data did not reflect the end of the month data when the government started to impose stricter social distancing rules and additional shutdowns. April job figures will, therefore, be more relevant and accurate.

The yellow metal rallied to a multi-year high above a key psychological level of $1,700. While the overall outlook for gold remains positive, given the current uncertainties, a stronger US dollar towards the end of the week has tamed the bid momentum. 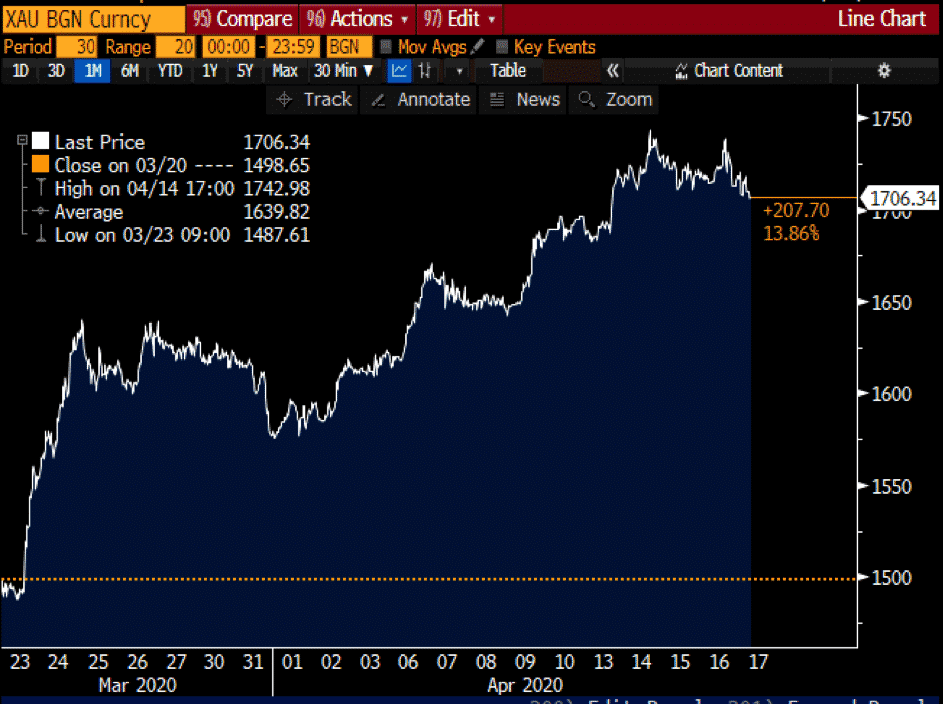 Major currencies were mostly weaker against the US dollar. Despite a series of disappointing data, the greenback is edging higher, lifted by its haven appeal compared to its peers.

The US dollar index, which tracks the performance of the greenback against a basket of currencies, was firmer this week and is trading just below the 100 level.