The Real Killer is the Coronavirus-Induced Unemployment

Summary:  Today, the U.S. Federal Reserve will release a survey confirming the economy is doomed for a long and painful downturn. Chairman Powell said in a webinar at the Peterson Institute for International Economics yesterday that one of the main findings, which is similar to that of many other surveys, is that lower-income Americans have been the most affected by the consequences of the virus. According to Powell: “Among people who were working in February, almost 40% of those in households making less than 40,000 USD a year had lost a job in March”.

The coronavirus is a pure negative externality. It initially caused a negative supply shock that was rapidly offset by a negative global aggregate demand shock. The fact that global commodity prices are plunging also speaks to the fact that we are dealing with a demand shock.

The only short-term solution to limit the spread of the virus was to favor social distancing and to implement strict lockdown where it was needed, which contributed to depress aggregate demand. Households were called upon to stay at home and avoid social interactions, which forced them to spend less. If consumers buy less, companies are inclined to produce less. In other words, if some companies can continue to produce despite these unusual circumstances, they do not necessarily have the incentive to do so. This will also have a negative impact on production and will cause massive layoffs. This is the phase in which we currently are.

In the United States, the economy destroyed more than 20 million jobs in April due to the lockdown, which pushed the unemployment rate to 14.7% from 4.4% a month earlier. According to several members of the Federal Reserve, the unemployment rate might quickly climb to 20%, eventually reaching a peak close to 30%. But a better indicator of what is actually happening is probably the ratio of unemployment as a share of the population (16 years and over) dropped to 51.3%. Said differently, only half of the population has a job.

The service sector has been the most affected by the coronavirus: more than 7 million jobs have been lost in leisure and hotels, almost 2.5 million in education and health, and another 2 million in retail trade. The below charts shows the impact on the unemployment rate by education level. We see that every unemployment rate quadrupled so far during the lockdown period, but as it is the case with every “normal” recession, the size of the shock is much greater for lower education levels than for higher ones. The only major difference is the amplitude of the shock in such a short period of time.

Large chunks of layoffs are considered as temporary (up to 70% in the United States according to the April nonfarm payrolls report). When the lockdown measures will be lifted, the economy will restart as normal, and companies will hire back those who were laid off during the crisis. I disagree with this assumption. If China leads the rest of the world in the ongoing process, then there is no V-shape recovery in perspective.

In China, it took one month to one month and a half for productive capacities to get back to 100%, but consumption remains sluggish. Retail sales fell 15.8% year-on-year in March, and restaurant spending plunged nearly 50% over the same period. Many shops are still desperately empty, even in Beijing. This phenomenon is called the hysteresis effect.

Although the pandemic has disappeared, it continues to have a noticeable effect on consumption and savings behavior. Due to the uncertain economic outlook and fears of rising unemployment, consumers are strongly inclined to save, which is a huge negative for aggregate demand, and will amplify the economic downturn. As a result, companies are facing increasing solvency issues, sometimes topping preexisting decreases in industrial profit (as it is the case in China where industrial profit was down minus 37% in Q1 2020).

They will have no other choice but to focus on restoring cash flows and cutting costs, including jobs. The vicious circle of sluggish aggregate demand and solvency issues is just about to start. It will lead to a strong and lasting jump in unemployment, which will be more important in countries with insufficient automatic stabilizers.

Winners and losers in the post-COVID world

Coronavirus scars will weaken the economy for years to come. Policymakers, with a massive inflow of liquidity into the economy, have delayed and postponed a lot of pain, but they have not eliminated it. The second economic wave is coming and will be characterized by weak demand, an unprecedented number of bankruptcies, and much higher unemployment. Before the outbreak, the global economy was already in a very weak position, with a high level of public and private debt, elevated market valuation, and low growth momentum. Historical precedent tends to indicate that, contrary to wars, there is no strong recovery after pandemics and depressive effects, such as depressed investment opportunities and increase in precautionary saving, can persist up to 40 years (see for further details this excellent paper published on the website of the NBER).

Another characteristic of pandemics is that they leave the poor even farther behind. One of the latest IMF blog posts (see here) using the net Gini coefficient concludes that pandemics progressively widen the gap between rich and poor and hurt employment prospects of those with only a basic education while scarcely affecting the employment of people with advanced degrees. The most striking finding is certainly that inequality tends to increase in the long run (the net Gini increased by nearly 1.5% after five years), confirming that pandemics scars have a very long-term impact on the broad economy. 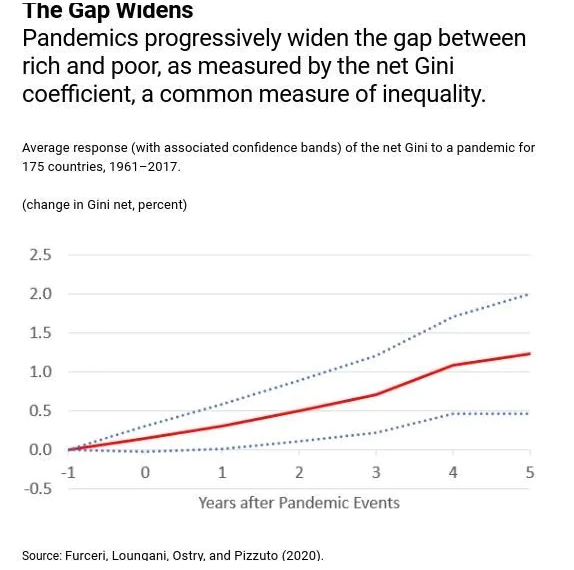 The risk is that the gap between rich and poor, symbolized in the below chart by the evolution of the S&P 500 since its low point of March 23 and the aggregate increase in U.S. jobless claims over the same period, will widen further. There has been plenty of research from the IMF and the Bank of England over the past years, demonstrating that quantitative easing induces a lasting jump in wealth inequalities due to the increase in the price of financial assets (see here, here and here).

Given the amount of liquidity injected by central banks all around the world, and the initial effect on the stock market, the winners of the ongoing crisis might likely be the 1%. On the contrary, the losers will be the rest of the population, especially the less educated, that will need to cope with higher unemployment and lower purchasing power.

Coronavirus unemployment is putting at risk the social contract made between citizens and the state and may pave the way to populism. Governments will certainly try to address the issues of unemployment and inequality by implementing more redistributive policies and letting the fiscal deficit widen. Will it be enough? I don’t have the answer yet, but I know that policymakers cannot let down the 99% one more time.