Coronavirus Economics : The Case for Coronabonds

Summary:  It’s clear that, in a crisis, rules don’t apply. To face one of the most important economic shocks of modern history, Germany has said goodbye to “Schwarze Null”, the EC has suspended budget rules and the ECB has considerably relaxed banking and financial regulations. Initially, the EU’s response was too slow and too little, but this week could be decisive and show the EU is not just only tedious financial transactions, but it is also about demonstrating solidarity with fellow European countries facing a tough time.

Click here to access to Saxo’s G7 Policy Tracker. It tracks every new monetary and fiscal measures implemented to fight the coronavirus crisis in G7 countries.

The 2012 European sovereign debt crisis led to the implementation of the banking union. The 2020 coronavirus outbreak could conduct the EU to go beyond that with the launch of Eurobonds, so-called “coronabonds”, that would imply to share out risk among all EU countries.

In 2012, the idea of Eurobonds had already been put forward by several European countries to deal with the crisis and limit the appreciation of Southern Europe bond spreads. But this idea had been firmly rejected by Germany at that moment. Now, it appears as an inevitable policy option to help EU states finance health spending and economic rescue programs.

Over the past few days, there have been calls from Spain and Italy in favor of “coronabonds” and the EC along with Germany and Netherlands have opened the door to this option on the condition that it is correctly structured. This morning, ECB’s Villeroy also expressed support for common EU issuance via the ESM structure.

The economic rationale: The main idea is to allow EU members to borrow at reasonable terms even in situations of emergency. For countries that can borrow at negative real rates such as France or Germany, this is business as usual. On the contrary, Italy and some other Southern European countries may find it more challenging to navigate the bond market in this period of crisis.

As we can see in the chart at the bottom of the page, the Italy-Germany 10-year gov bond spread has almost doubled since the COVID-19 outbreak. There are mostly two options to cope with ongoing market tensions. The first one is to resort to the ECB’s asset purchases. The sharp increase in Germany’s new debt issuance of about €350bn this year has addressed QE scarcity, but without deviation from a capital key, which is not on the table at the very moment, it would mean the ECB will need to buy even more German debt than it really needs in order to buy additional Italian or Spanish bonds.

This is certainly not the most efficient way to channel funds to countries in need. The second option is to favor some form of debt mutualisation. It would consist of issuing joint Eurozone bonds or “coronabonds” and distribute the new funds raised at low rates accordingly. This option is currently favored by a growing number of EU states.

Pre-conditions: A wide political support, especially from Germany and the Netherlands, requires that the common EU issuance will be well-structured and avoid introducing moral hazard. We have identified at least three pre-conditions.

There are still many unanswered questions regarding whether countries in need could have illimited access to new funds, or whether a capital key rule would apply, and how much would be charged by the ESM.

The next steps: We could have an announcement as early as this week. The Eurogroup will convene via videoconference on 24 March at 18:30 CET and could discuss technical aspects of “coronabonds”, amongst other things. Only EU leaders can go ahead with this idea, so the videoconference summit scheduled for 26 March may be of crucial importance. In a second step:

There is no come back: What we have learnt from previous crises is that when rules are broken, there is no comeback. The COVID-19 is a human and economic tragedy, but we need to see the bigger picture and the positive changes that may result from this troubled period. Europe is finally showing solidarity with countries in despair and distances itself from budget orthodoxy (especially in Germany) and the inefficient 3% deficit rule.

Once the health crisis is contained, it will be important to start a comprehensive discussion at the EU level on the level of public debt and make sure that the additional debt incurred for the sole purpose of fighting the coronavirus will not remain on national books. It will also be necessary to think about the opportunity of launching special Eurobonds for infrastructure investments or to finance climate change solutions. 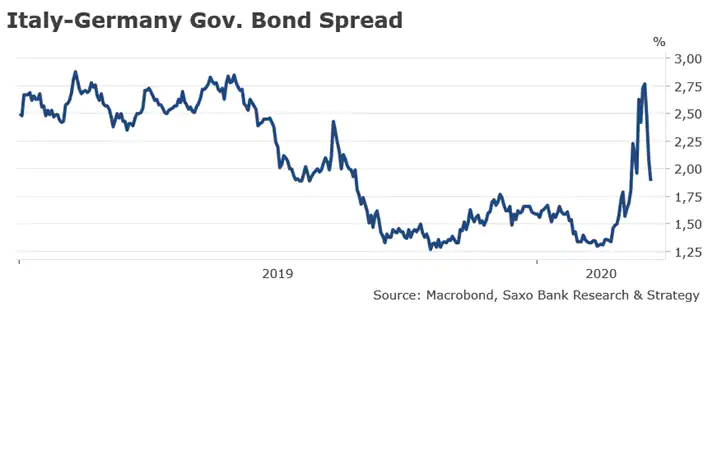