Risk sentiment faltered on Wall Street as the United States reported its highest daily death toll from the novel coronavirus and investors have scaled back the expectations of oil production cuts.

Major US equity benchmarks finished modestly in negative territory despite a strong start:

The pandemic curves of some countries are showing some early signs of flattening, but it is too early to confirm a peak. We expect volatility to remain in high levels, reflecting the uncertainties prevailing in the markets predominantly driven by the health and economic crisis.

In the FX market, major currencies were stronger against the US dollar. Despite the deterioration in risk sentiment in the US session, the safe-haven currencies like the greenback and the Japanese Yen were unable to edge higher.

The US dollar index which measures the performance of a basket of currencies has retreated below the 100-level and is currently trading at 99.96. 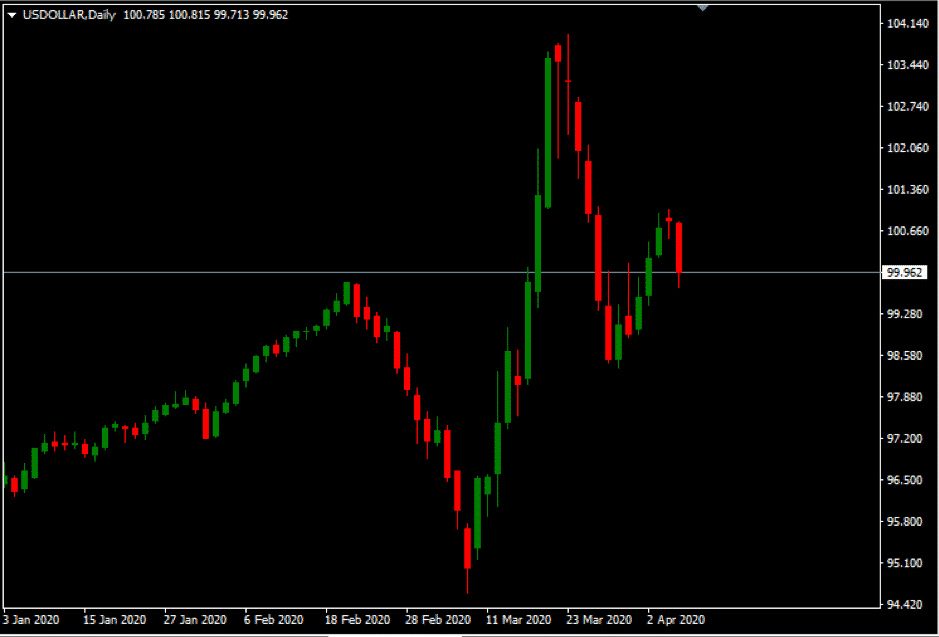 The Australian dollar was among the best performers, buoyed by the RBA’s interest decision and rate statement. As widely expected, the central bank kept interest rate unchanged at 0.25%. However, the attention was mostly on the optimistic tones in the monetary policy statement:

The Aussie dollar reached a high of 62 US cents following the RBA’s statement and a weaker greenback before paring some gains to close at 61.68 US cents. Home Loans and Investment Lending for Homes will be looked upon for fresh impetus before the release of the FOMC minutes in the US session.

Crude oil prices fell on Tuesday as traders are not convinced that that the production cuts will be enough to bring stability in the oil industry. The upcoming OPEC meeting is marred by various speculations and the widened rift between Saudi Arabia and Russia.

Given that the US has initiated talks to salvage the relationship between the two countries, the US is now facing pressure to join OPEC and its allies in a global supply cut. Even though the EIA reports are already showing projected cuts without any government intervention, the OPEC+ deal could heavily depend on the US willingness to commit to production cuts.

On the data front, the API Weekly Crude Oil Stock rose from the previous 10.485M to 11.938M in the week ending April 3 and traders will likely be looking for the EIA report for fresh trading impetus. As of writing, WTI and Brent Crude pared some of the losses made on Monday’s open to trading in the vicinity of $24 and $28 respectively.

Gold was unable to find a firm direction to the upside, despite the weakness in the US dollar, and traded sideways. The precious metal remains in elevated levels and the overall outlook for gold stays positive given the current uncertainties. As of writing, the XAUUSD pair is currently trading just below the $1,650 level.