“The hardest thing to judge is what level of risk is safe.” – George Soros

Better US economic data and a rebound in Boeing shares has restored some optimism across stock markets. Asian markets gained after a late turnaround on Wall Street and European shares are pointed higher early Tuesday. But while shares look firmer- so does the US dollar ahead of testimony from Fed Chair Powell and Treasury Secretary Steve Mnuchin.

Jay Powell today will say that the recovery path is “extraordinarily uncertain.” He has already testified recently at the semi-annual Humphrey Hawkins, so no big shocks are expected. Steve Mnuchin will say the “US is in a strong position to recover” and that depending on the outlook, it’s possible the Treasury “will work further with Congress on aid in July.” The two men will hope a more upbeat outlook for the economy, but the promise of more support, if needed, is the right balance for politicians and markets.

The UK just recorded its largest quarterly fall in GDP for over 40 years in the first quarter. Sterling had already broken down before the news as traders feared the worst. The pound is at 3-month lows versus the euro. Unfortunately, things are set to get much worse in Q2 data when the UK economy is expected to lose a quarter of its value. With the worst economic decline in decades and EU trade concerns lingering, one might argue the pound is holding up very well.

Test flights are being conducted for the re-certification of the Boeing 737-Max jets. It’s a first pre-amble to them returning to the skies, possibly by late this year. The planes have been grounded since March 13 after two deadly crashes. The re-certification would be a big cloud lifted over the future of Boeing.

Still, expectations for the demand for new jets from airlines are down substantially since the 737-Max was grounded. A case in point – Norwegian just dropped its entire 737-Max order today. The chances of Boeing shares recovering those pre-grounding heights anytime soon look remote.

Today marks the last day of June, and of the second quarter. It will be one of the best quarterly performances for global stock markets for years. The S&P 500 has risen around 17% in the second quarter, its best 3-month performance since 1998. The MSCI All-country index is up 18% this quarter for its best performance in 11 years. After such a strong quarter, sellers may have lost some of their conviction, but we could start to run out of new buyers in Q3. 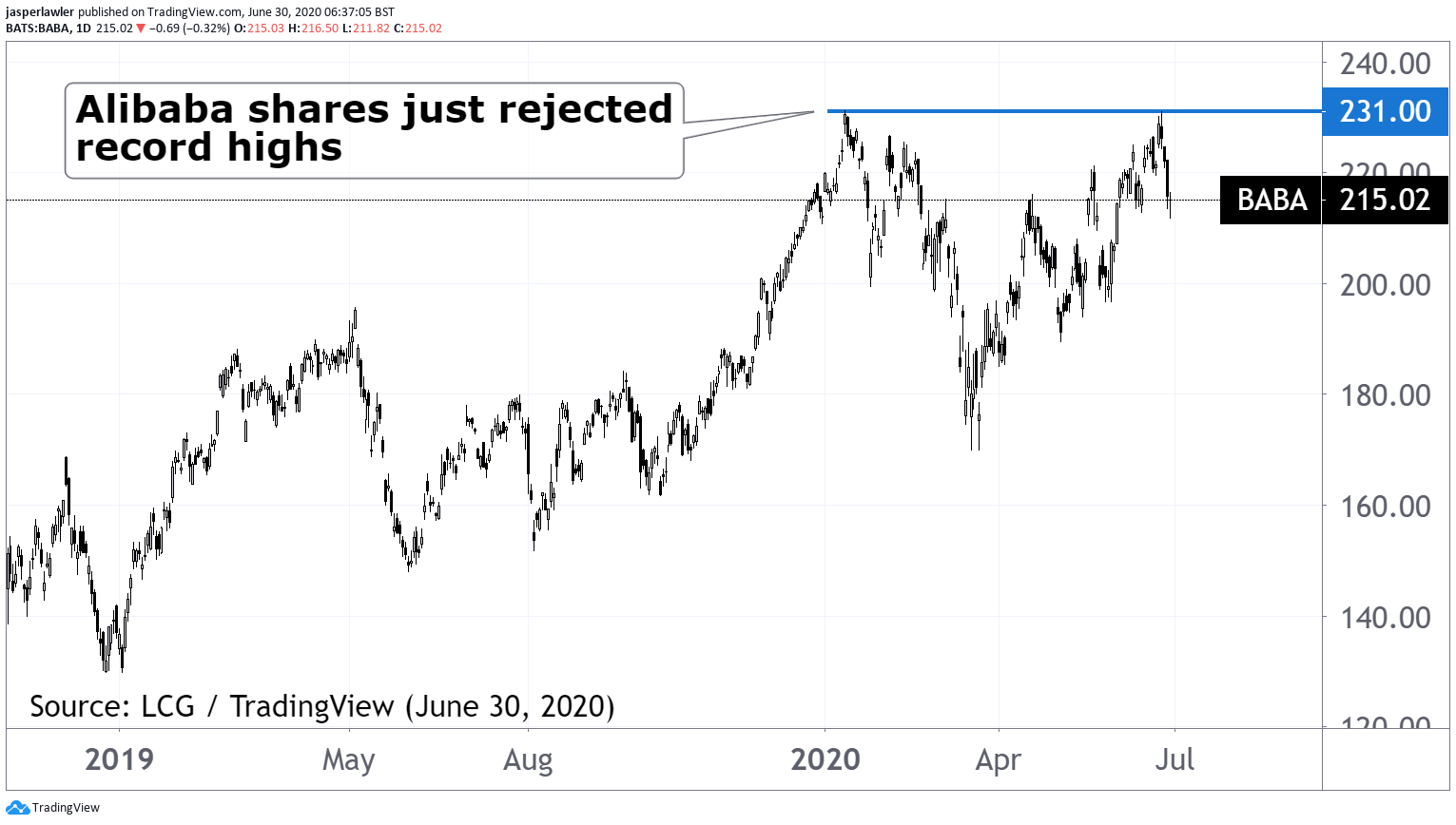 While some of the FAANG stocks, including Apple and Amazon, have hit multiple record highs since the March sell-off, so far, Alibaba shares have not – with a recent failure at the 231 level.