There are some nerves before the press conference called by President Trump to announce the US response to the Hong Kong issue.

European shares have opened with a softer tone on Friday. Asian markets slipped, with the Hang Seng again the laggard. The S&P 500 reversed a 1% gain yesterday to end slightly lower, snapping a 3-day winning streak. The euro was a standout gainer on rising hopes for the EU bailout fund, but elsewhere haven’t currencies like the yen were preferred. The price of gold nudged up to $1720 per oz while oil turned lower after US inventory data showed US demand remains weak.

The sense in markets is that Trump won’t come down too heavily on China over Hong Kong. Major US stock averages are on course for just under 3% weekly gains, demonstrating little evidence of concern about the wider issue of US-China tensions. We think it would be a significant shock to markets were Trump to announce anything that risked the phase one trade deal. Revoking Hong Kong’s Special Status with the US seems unlikely. It wouldn’t help the people of Hong Kong and would be a self-inflicted wound because it would just limit US company access to China.

Legal experts are calling the order toothless but saying it could lead to other bigger changes in the law down the road. Social media shares fell ahead of the signing, but it wouldn’t be surprising to see some opportunistic dip-buying now the news has passed. The debate over ‘de-platforming’ will likely not stop here. For now, the big social media companies have too much market share to dissuade conservatives from participating despite concerns of being silenced – meaning revenues are left unimpacted. That could change over time if social media companies don’t get the balance right.

Join one of the brand new LCG WEBINAR series – covering everything from the Beer industry to fintech shares to breakout trading.

The euro was a standout winner in FX markets. There’s a prevailing idea that France, Germany, and the European Commission can broker a compromise on the Recovery Fund between the PIIGS and the ‘Frugals’. The newfound strength in the euro comes ahead of next week’s ECB meeting, where expectations are building for an expansion of the PEPP. Of course, more money printing devalues a currency, but FX traders are rewarding European central bankers for trying to avert a bigger crisis. 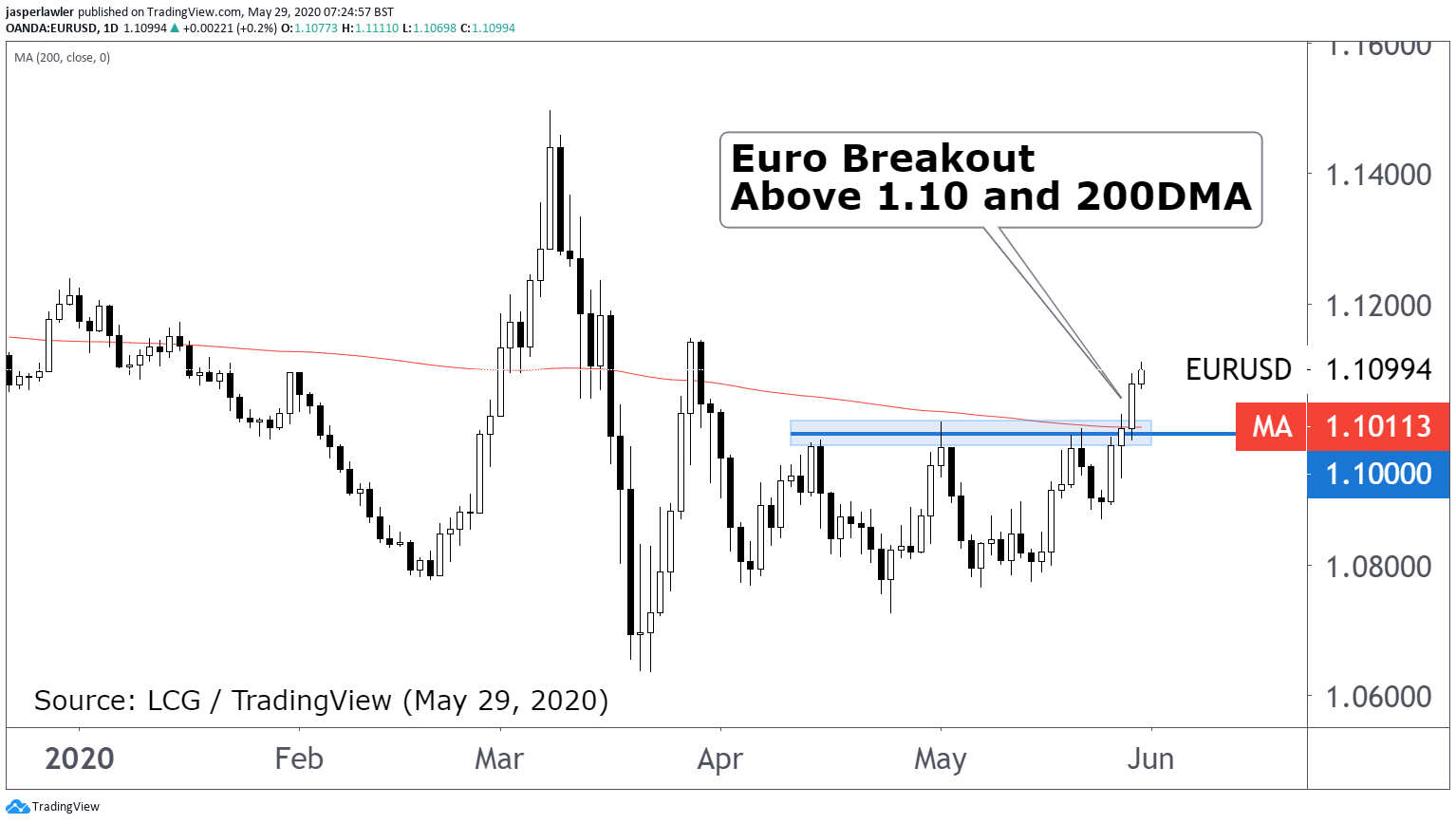 The Euro is making a decisive breakout above twin resistance of the 1.10 round number and the 200-day moving average, suggesting the beginning of a new bullish period.