The ‘state-sanctioned’ bull market in Chinese shares continues to gain momentum on Tuesday. Valuations in China are a lot more reasonable than the United States and with PBOC liquidity and state-backing, could have a lot further to go.

European markets have opened lower. The losses in Europe come before the European Commission updates its forecast for the worst ever recession for the EU.

Wall Street looks set to give back some of Monday’s gains that saw shares of Amazon and Google reach fresh record highs. The new record for Alphabet shares meant the re-emergence of the #MAGA 1 trillion valuation club of companies – Microsoft, Apple, Google, Amazon.

Social media companies are reassessing their position with regard to Hong Kong. Tiktok – which is still privately listed announced it would withdraw from the city in the coming days. Facebook has suspended passing data to Hong Kong authorities when requested.

It’s not so much a newfound compassion for HongKonger civil rights but a precautionary move before possible US sanctions. Companies like Facebook have been wooing China and its huge market authorities for years and will be a big setback if they decide to take this stance.

The euro had been a top riser on Monday but has slipped in early trade ahead of European Commission forecasts.

The Aussie dollar stalled at the 0.70 big level this morning and has rolled over, despite the ongoing strength in Chinese equities (see chart below). A fresh rejection at 0.70 could inject more concern over the State of Victoria reintroducing internal borders. Likewise, the Kiwi dollar (NZD/USD) has turned lower from its June 11 4-month peak.

Gold came just shy of new 7-year highs on Monday as the Fed main street lending program went live. The minting of new dollars to lend to companies that can’t get bank credit feels like the kind of policy where gold should thrive. It is edging lower in early trade Tuesday.

WTI and Brent crude oil are pulling back from equalling the 3-month tops made in June. API inventories data is released later following the surprise 8million barrel draw last week. 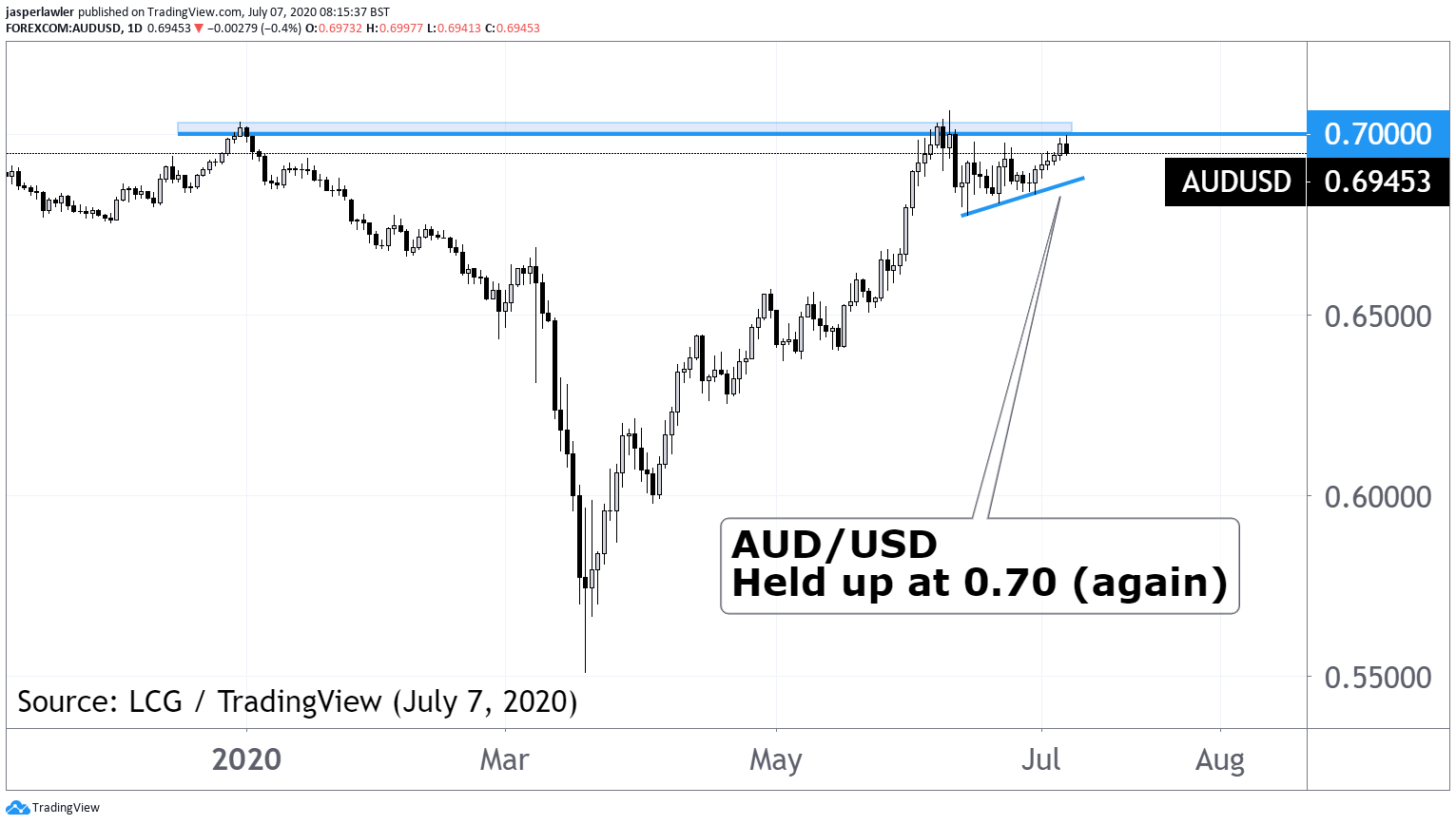 AUD/USD continues to consolidate in an ascending triangle below 0.70.