The Daily Fix - Traders thoughts on the open

While it is hard to keep up with the ever-changing news flow, the weekend narrative has largely focused on the economic damage the virus will inflict. The concerns are clearly mounting as economic deterioration hits home this week, where the data will start to show the impact, notably around layoffs. The weekly US jobless claims have largely been irrelevant as a market driver for some years, but this Thursday they will become a showcase of the global labour market, and the spike in claims (consensus 1.5m claims) should bring the reality home.

The fact St Louis Fed President James Bullard, has suggested this morning that the US jobless rate could push to 30% optimises this call and will do little to ease worries. Just reading sentiment on social media, it feels like there is no one feeling risk has any hope at all, and the feeling is rallies are to be sold. I can’t disagree with this call and downside risk is there, and it seems traders are less interested in stimulus and more the case curve at there guide.

If we look at Friday’s trade as our guide, those expecting further downside in risk will have seen the S&P500 cash closing -4.3%, and firmly below the December 2018 low of 2346, with futures down a further 0.7% after the cash close. High yield credit continues to be central to the risk story and needs to be on the radar, where we see HY credit spreads (vs USTs) blowing up a further 47bp to sit above 1000bp – the 12.7% decline in crude clearly not helping matters. And until we see credit under control then it’s hard to suggest we are near the bottom in the equity story.

We also saw buying in Treasuries, which suggests the liquidation we saw on Thursday in the bond market reversed, with UST 5s closing -23bp, with 10s -30bp, resulting in a massive flattening of the curve. ‘Real’ (or inflation-adjusted) yields were crushed -51bp in 5-year, which I guess is a positive for equities and credit, but we really need real yields to turn deeply negative again to offer any support. It was positive to see FX basis and USD funding coming in substantially in EURUSD and USDJPY, which has helped curb the USD move, with the USD index closing unchanged. That is a different story today, as its all USD buyers again.

AUDUSD cross-currency swaps did blow out to the highest levels ever and it’s not hard to see why traders lent against 0.5988 causing a decent sell-off into the 0.5802, although much of that had to do with the bleed into the close in the S&P500. We saw small buyers in the AUD crosses initially, but it’s all sellers here with S&P500 futures opening limit down and it feels like we head lower in AUDJPY – It seems unlikely that we see any positive reaction to the Morrison $66b stimulus announced yesterday, but it is a cross I will be watching in the early Asia trading hours.

We’re seeing strong sellers of NZD this morning, with the RBNZ detailing that they are starting an NZ$30b QE program and NZDUSD is getting a good working over.

European equities traded well (the DAX closed +3.7%) and closed out a solid week of outperformance on a relative basis, but the open later today will not be as positive, as will be the case here in Asia. Headlines of Germany expanding its 2020 budget marry well with news they are to massively increase debt issuance by some E350b. This should offer the ECB an increased pool of bonds to purchase as part of its QE program. That said, it’s too hard to buy the Italian MIB or DAX outright, especially when we see headlines of 651 deaths its hard to say the worst is behind us.

In this environment, it’s too hard to be long an index outright and would rather buy as part of a long/short idea. Where the trigger for outright longs comes when we get a sense that we are seeing evidence of the case count curve plateauing and about to flatten out. We’re not seeing that yet, but when it comes, the buyers will step in…this is also true in the US, where despite moves from the Fed and various fiscal measures, the trigger and green light to buy, at least for more than an intra-day trade, is the case curve. A Flatter curve equates to buying risk, and with the US case count pushing to 32,356 and a truly worrying 8149 new cases on the day, subsequently, we’re not there yet by any means. 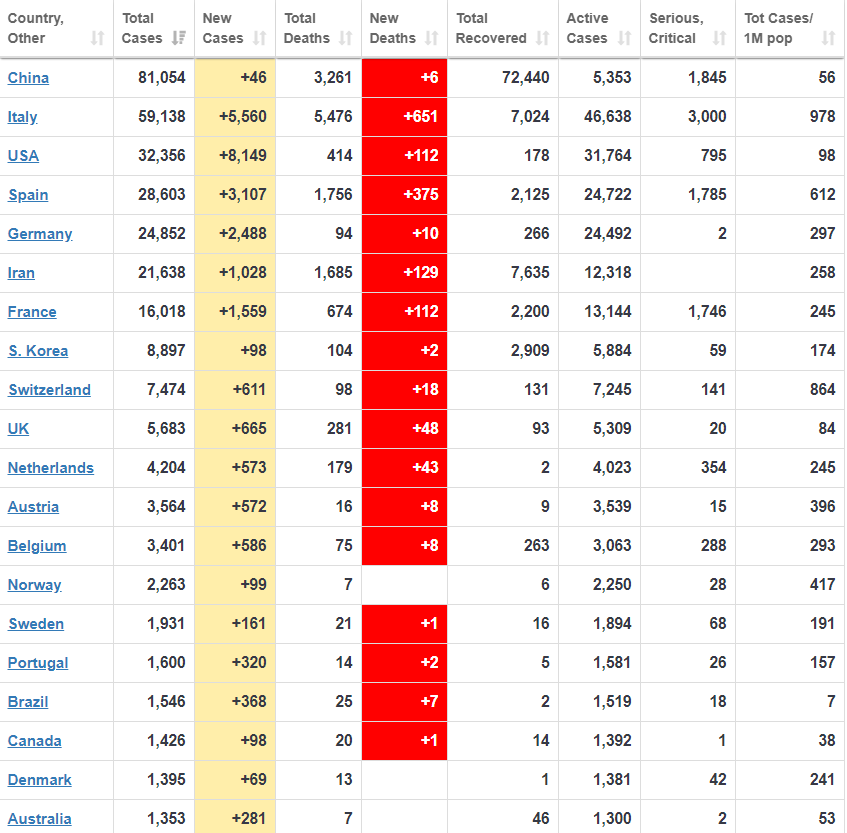 The feeling on the floor was that there was already an elevated risk S&P500 futures traded limit down at some stage today given just how dire sentiment is, and traders continue to watch headlines on Congress finalising the Phase 3 fiscal bill, with Nancy Pelosi detailing this morning that – *PELOSI: BIG DIFFERENCE BETWEEN WHAT DEMOCRATS, REPUBLICANS WANT. The Senate needed to get this through ASAP, but its been rejected, before they even pass this to the House. The market will not like this and we need to see a new plan being reworked.
That said, the news flow is incredibly fluid, with a lot of attention on the fact UST Secretary Mnuchin has talked about working with the Federal Reserve to leverage up to $4t of liquidity to support the economy. That is obviously an incredible amount of capital to deploy over a quarter, but it feels the market is just tha tinterested at this stage – https://www.reuters.com/ article/us-health-coronavirus-usa-mnuchin/coronavirus-aid-bill-includes-3000-for-families-4-trillion-liquidity-for-fed-mnuchin-idUSKBN2190LL

The Fed will have to do more too, and despite the central bank buying some $100b on bonds on Friday alone, the run-rate will keep heading higher from here and the discussion about calming the corporate bond market will intensify. Talk of closing equity markets is still in play, but this makes little sense to me in a world where we are already seeing incredible dislocation in asset classes, and if I cant hedge my equity risk I’ll sell AUDJPY, which just distorts things even more.