Trader thoughts – a strong reversal in risk but is it sustainable?
It’s been an incredibly interesting 24 hours on markets, with Asia de-risking on concerns that China was seeing a renewed breakout in cases. While the 7-day case count in US states such as Florida, Alabama, Arkansas, Oregon, and South Carolina had increased meaningfully. In fact, re-openings in Oregon and Utah had been put on ice, and Asia took its direction here moving to cash, buying JPY, USD, CHF and US Treasuries, with US 30s trading lower by 7bp to hit to test the 50-day MA at 1.38%.

In this dynamic, traders were good buyers of volatility, with the cash VIX index re-opening (17:15aest) at a new run high of 44%, taking our VIX index (which is priced off the VIX front month futures) above 40%.

That is old news though, and through European and US trade traders saw the world through a different lens and markets reversed hard. The S&P500 futures troughed almost the minute Australia and Japan closed, and from here it was one way, and we find S&P500 futures a lazy 4.9% off the low.

As we are so accustomed too, risk FX moved with S&P500 futures, with a solid rise in AUDUSD from 0.6777 to 0.6925, while USDNOK has had the most impressive percentage move with a 2.8% sell-off. Crude has pushed 7% off the low and has printed a bullish reversal, with price printing a lower low and going on to close above Fridays high – while price is still holding below the 5-day EMA, if this kicks on today, I’d be a ST buyer for a re-test of $40. 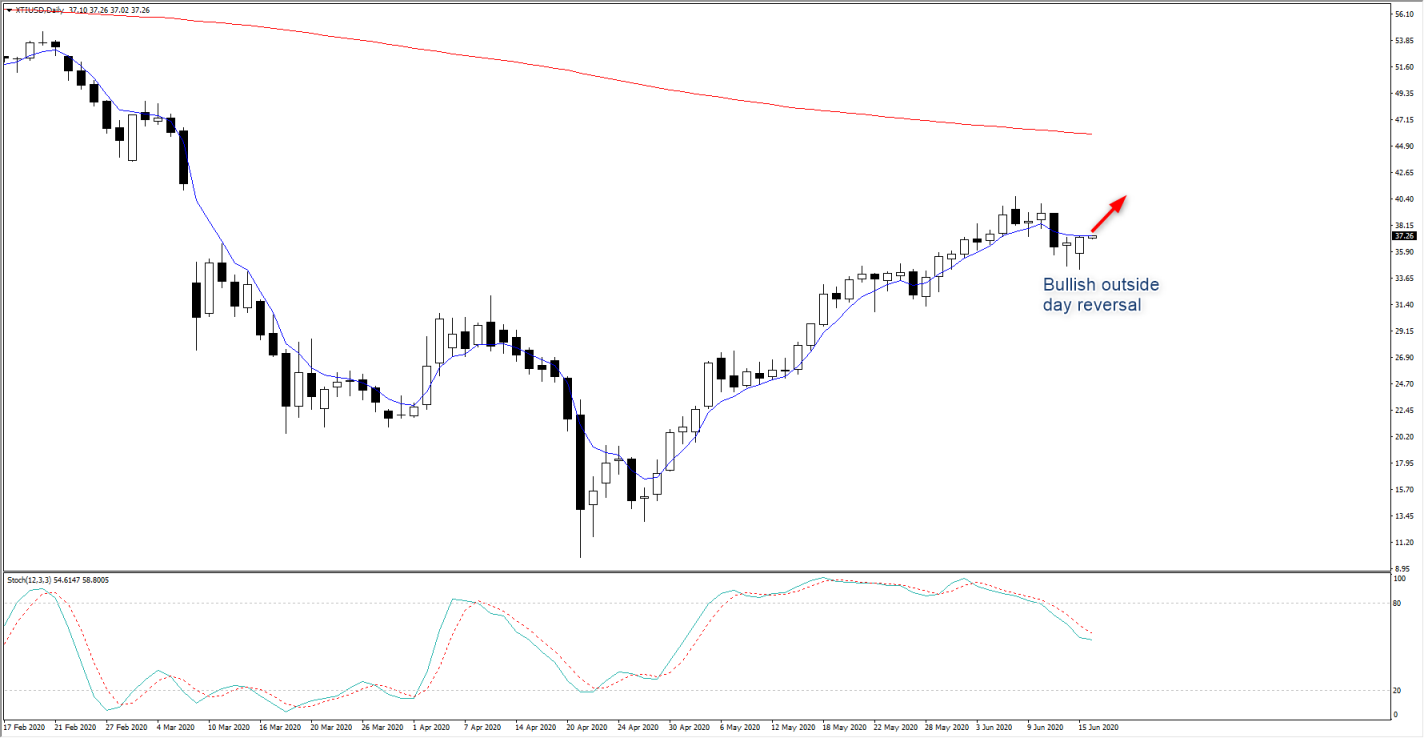 EURUSD has been well traded on the reversal higher, with good two-way flow on the move from 1.1227 to 1.1333, stopping just shy of Fridays high of 1.1339. The pair stays in focus with EU CPI and German ZEW survey due (both 7pm AEST/ 10am BST), with the latter expected to improve, which could keep the wind to the EURs back.

GBPUSD has also been well traded on the move to 1.2604, although, like all the other FX pairs, make no mistake this is not about the GBP, and should be seen as a USD sell-off in response to a rally in S&P500 futures. UK jobs are in play today, although this is unlikely to be a vol event, with the main event still Thursday’s BoE meeting and whether the bank increases its QE run rate by the expected £100b to £745b. The question I have is whether a greater level of QE (say more than £100b) acts as a GBP negative or positive? In theory, its negative but FX markets have generally rewarded currencies where the central bank or government have gone harder to aid the economy.

The move in S&P500 futures saw a fairly dramatic reversal in vol, with the VIX index offered all through cash trade, to close at 34.4%. Credit spreads have come in hard, which is key, while bond yields reversed higher and closed largely unchanged across the treasury curve. The move in credit is perhaps the talking point on the session, and as we see here, when corporate credit spreads collapsed, it promoted a new wave higher in the S&P500.

Many have focused on the announcement that the Fed would begin diversifying the purchases and its portfolio of corporate bonds. Previously, the Fed have been buyers of credit ETFs, so this expands their reach to individual investment-grade corporate bonds. To be fair, this was expected, and this is simply confirmation of the move and we still await clarity on the pace of the purchases. The market will learn more on this when the Fed publishes its weekly balance sheet changes.

So, what have we learnt? Well, the market is really keen to defend the 3000 level in the S&P500 – that seems definitive. We see once again that the USD is guided by risk, so while correlations break, if you sit in the camp that equities trade higher over a period and credit stay tight then the USD will be sold on rallies, and vice versa. And we’ve learnt that the markets can be incredibly fickle when they are looking at COVID19 stats…what one region sees may not be what enough sees.

It makes for an insightful session in Asia and after the downbeat moves yesterday and the subsequent massive turnaround in risk in EU/US trade, Asia is expected to see a strong open, with Aussie SPI futures +2.5% and Hang Send futures +1.7%. Will traders fade the opening strength, following semantics felt yesterday or go with the new flow and bid up risk from the get-go? One to watch.

Also , consider  in US trade tonight we get May retail sales  (expected +8.4%) and industrial production (+3%), while Jerome Powell (00:00aest) and VC Clarida (6am AEST) are due to speak and  could move markets.