Trader thoughts – the USD is losing its mojo
The big talking point is undoubtedly the offer in the USD, with the USDX smashing the 200-day MA and trading to the lowest since mid-March. Five days of selling is not something we’re used to, but the greenback is the ugly child of G10 FX and, for now at least, has lost its mojo.

Here are thoughts on the USD move I put on Twitter and Telegram – https://youtu.be/7BmMtbOXVm8

It’s the higher beta FX names which are flying, with some huge moves in the AUD, CAD and NZD, and not just against the USD, but the funding currencies too – JPY, CHF and to a lesser extent EUR. I looked at long CADJPY positions yesterday and hadn’t expected this sort of move. As detailed, I was going to add but am just not interested in holding decent exposures over the Bank of Canada meeting tomorrow, given the possibility we see new easing programs being announced. For BoC watchers, it heralds a change of guards with Tiff Macklem taking the reins from Gov Poloz.

The AUD is in beast mode

The AUD is in beast mode, pushing into 0.6813 and the highest levels since 23 January, in turn, taking the gains from the 19 March low to a staggering 23%. In terms of levels, 0.6850 is one that I had on the radar as an area of potential supply, and on the session, I would be surprised if price breached here. It also wouldn’t surprise if we saw some modest profit-taking/position squaring into the RBA meeting at 14:30aest. 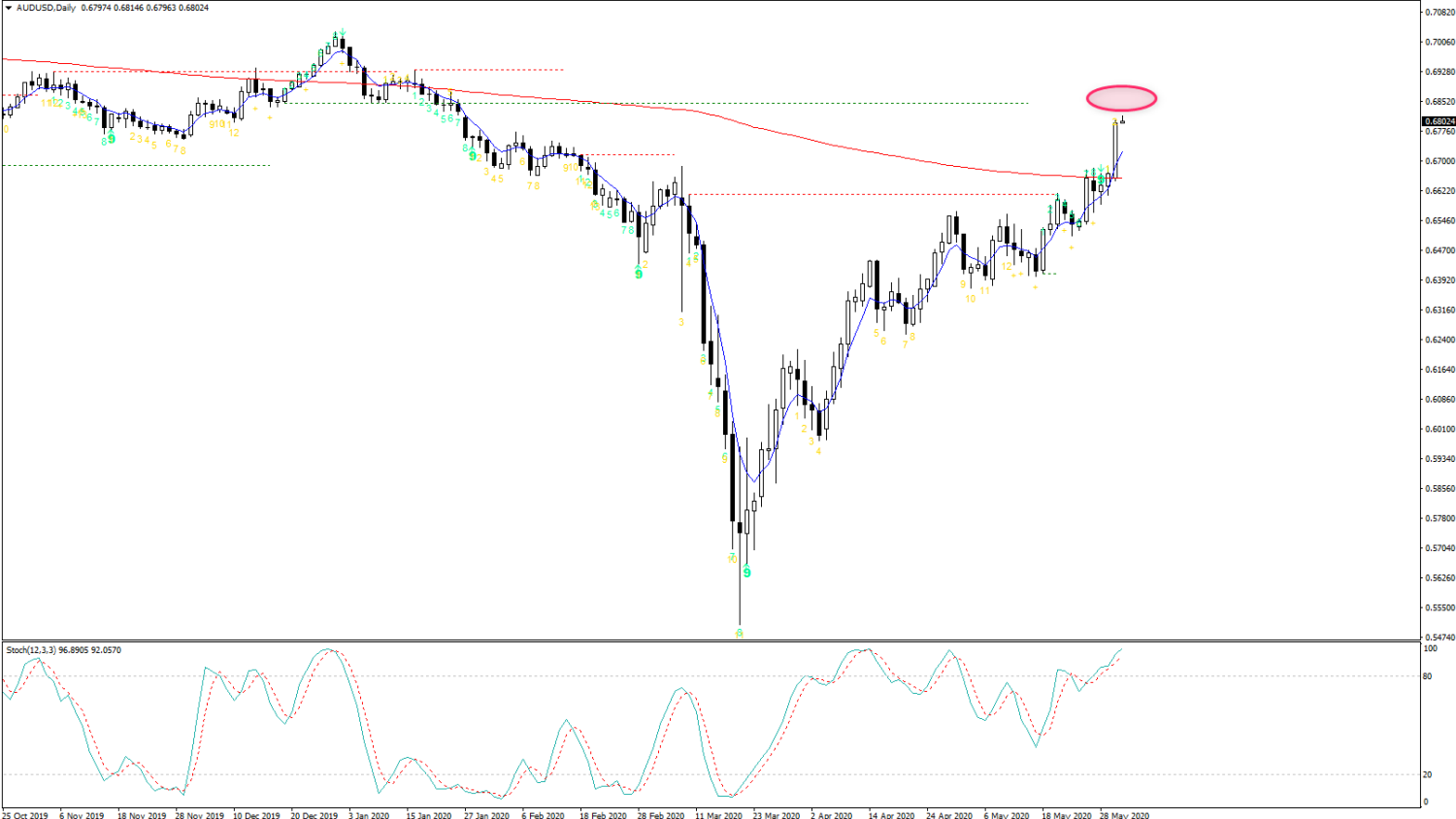 This AUD rally won’t have gone unnoticed at the RBA, who would have also seen the trade-weighted AUD not far off the highest levels of 2020. That said, it’s unlikely the RBA go anywhere near the currency today, but continue with the glass half-full rhetoric, where last week governor Lowe said “with the national health outcomes better than earlier feared, it is possible that the economic downturn will not be as severe as earlier though. Much depends on how quickly confidence can be restored”. This should come across in the statement.

The AUD aside, the RBA will be very content by what they are seeing in the rates markets. Funding rates are low, with BBSW-OIS at -5bp, while the overnight cash rate sits anchored to 14bp, with the Aussie 3yr Treasury holding their target of 25bp. The result is that we have seen the RBA make no bond purchases since 6 May, which is seen as a small AUD positive, while we have also seen the RBA’s surplus settlement balances reduced by A$40b (to $48b). Reduced liquidity is also a tailwind for the AUD, especially given the balance sheet dynamics at other central banks.

If we look elsewhere, iron ore has been on fire of late, which won’t have done any harm to the Aussie, although iron ore futures are -2.2% overnight. However, this is a USD move and traders are choosing the best vehicle to play against the USD.

The US is now not the only game in town

On one hand, you have positive trending equity markets, not just in the USD, but globally, while corporates are issuing debt at a rate of knots. Fine, we’re not seeing any real outperformance in EU equities at this stage, but we may if the market genuinely feel EU stocks deserve a higher multiple if the recovery fund gets approved and we see tighter peripheral yield spreads vs German bunds. That would take the EURUSD into 1.1500 over time (not a target). 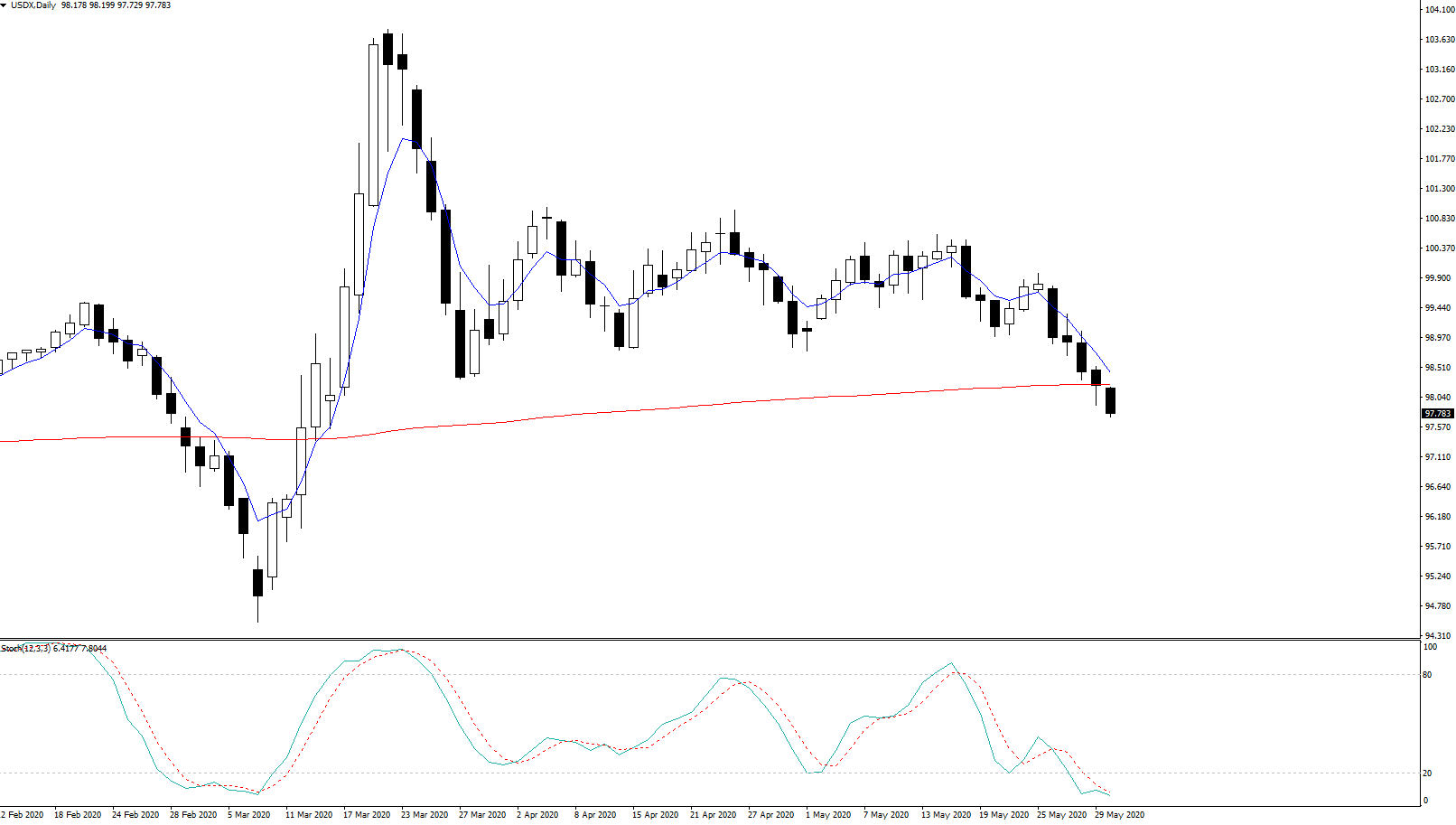 We’re seeing global economic data come in less bad, as re-openings play out on a global basis, and while US data is also improving, the US is not the stand-alone island it once was. Global capital which that was directed to the US as the only game in town is being re-distributed, if even if this proves to be a short-term phenomenon.

We then have situations idiosyncratic to the US, notably with US-China tensions, while the George Floyd protests are likely to have an economic impact at a time when the Atlanta Fed is estimating US Q2 GDP is set to fall -52.7%. As detailed yesterday, it is already having a political impact, with a Sunday ABC poll putting Biden ahead by 10-points and Predictit having Biden lead for the first time. The Senate is a close call as well and one that could be just as important.

The USD bear move may reverse, but to do this on a sustained basis the USD bulls will need to see the S&P500 sell-off, with higher implied volatility. They will need US ‘real’ bond yields to start rising and rising fast. This would be the trigger for a sustained reversal in the USD. For now, though the world is healing, and the USD is not the mecca for capital is was in March.