Market participants adopt their geo-political hats again this week, with the focus still on global re-openings and the new cases count, but more so on US-China relations and developments in HK.

While tension rise, Asia has been dealt a positive lead and I say that because US equity trade on  Friday could have been far uglier, and while it was hardly prolific, from the moment the cash markets opened the buyers supported. Implied volatility has pulled back some more, with the VIX index -1.37 vols to 28.16%, while we have seen limited moves in US Treasuries, and small selling in crude. S&P500 and NAS100 futures are unchanged on open.

Gold continues to find the downside limited, and while the investment case for precious metals is as bullish as you’ll see, the gold price continues to hold the multi-week regression channel, with many pointing to the bearish divergence between price and the RSIs. Happy to stay long, but gold is an asset that one can easily get married to. So, while gold can offer a strong uncorrelated hedge for the investment portfolio, falling in love with a trade is not something traders can afford so I will cut and run if the flow changes.

Volumes were awful on Friday as traders took extended leave, so that has taken some gloss of the rally. Technically, the S&P500 continues to cling to the 61.8 fibo of the Feb-March sell-off, 100-day MA (2969) and 200-day MA 2999. It’s easy to feel bearish, but the price action still feels like, on balance, that the risk is to the upside in US equities. It’s hard as the market is effectively going sideways, and its one where rather than prophecies, that reacting is the way to go – so the probability trade is to wait for the market to show me it’s hand.

I thought I’d share this was a chart, which shows the current move in the S&P500 against the move seen in 2008 (GFC bear market) and then 2009 (the GFC recovery). Most strategists have been expecting a re-run of 2008, and that may still be the case, but a re-run of 2009 looks interesting and would be the pain trade.

The FX open has been a calm affair with the weekend news failing to really spur any big re-opening moves. We have partial trading today in several equity and commodity futures markets, with Memorial Day affecting the various US-based exchanges, and May Day keeping moves in the UK under wraps.

HK and mainland Chinese equity markets will get the focus through Asia and our flow in HK50 will likely be elevated today, notably after some strong moves on Friday, with the HK50 falling 5.6%. It wouldn’t surprise to see the HK market re-open on the back foot, despite HK50 futures closing +0.4% on Friday. The set-up we see on the weekly chart looks miserable, and scenes of tear gas being fired on protestors in HK only serve to elevate the risk of re-test of the March lows.

There will be some focus on HK 12-month forward rates, which have gapped up 510 points on Thursday and Friday, and subsequently, the hedge fund community question their positioning on a break of the USDHKD peg.

USDCNH remains a beacon, with price moving into the top of the range and we see 1-month implied volatility (vol) pushing to 5.93%, which to be fair is not too high given the backdrop of the war of words between the US and China clearly deteriorating. Especially when we hear of a ‘new cold war’ being used by China’s foreign minister. The situation remains fluid and the bulls will be wanting to hear of some sort of circuit breaker, perhaps a meeting between Pompeo and Liu He or any high-level talks to believe we can find convergence. Until such time, the market is likely to hear of more defensive rhetoric.

A break of 7.1643 in USDCNH, especially if vols do pick up, would weigh on Asia FX and the antipodeans. On the day, I feel strongly that any bullish follow-through should be contained to R2 (7.1840), although that may be a stretch with the daily implied move (through options pricing) at 7.1774. Look for AUDUSD to test Fridays low of 0.6506 should USDCNH push higher, although I would expect the downside moves to be limited and supported into 0.6485/80. 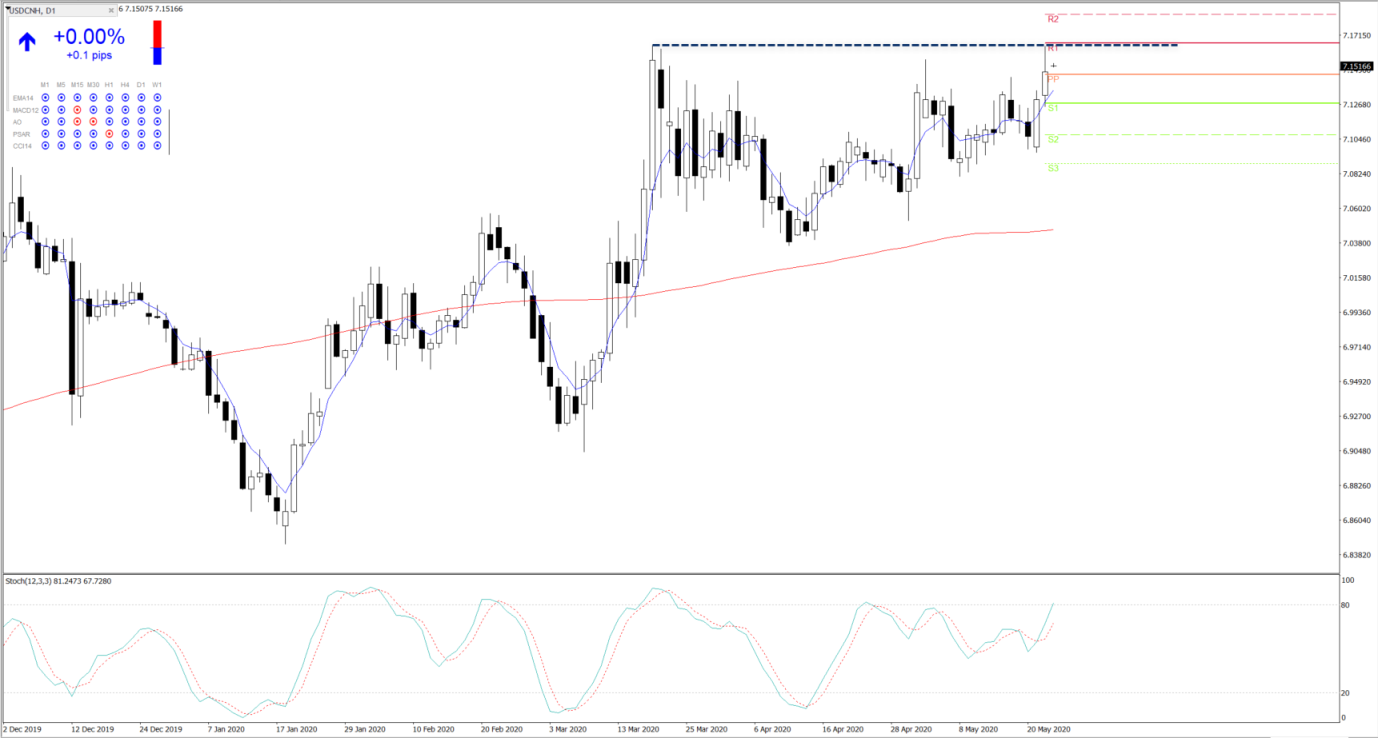 USDCAD also has a place on the radar given this set-up. I quite like this higher for a test of trend resistance, with stops under 1.3940. However, this pair gets interesting on a break of the floor at 1.3850 or through 1.4150. 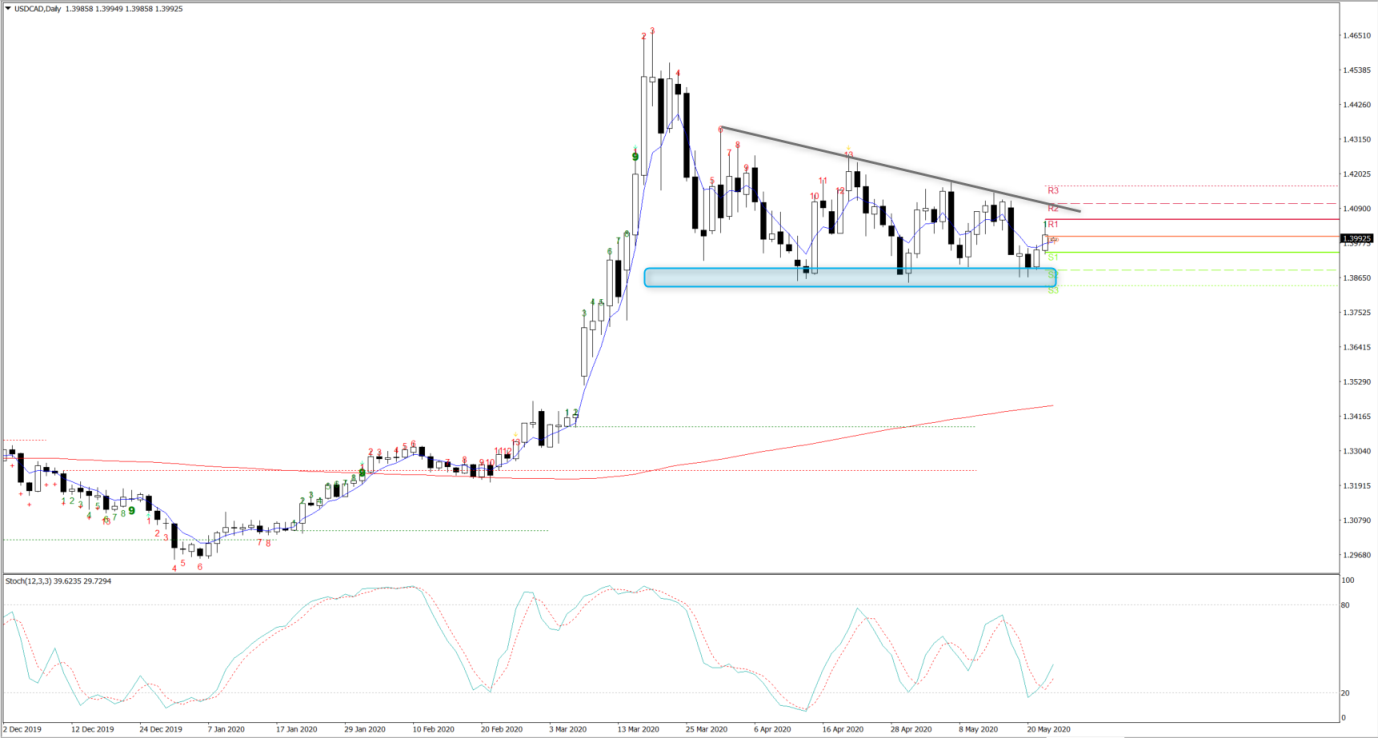