Markets Dovish as the Coronavirus Impact on the Economy Worsens

Trader thoughts on the session

JPM sees US unemployment rising to 6.25%, just by mid-year (now at 3.5%) and this would be even higher given US Treasury Secretary Mnuchin’s ‘20% US unemployment without stimulus’ call yesterday. I’ll go out and say the US weekly jobless claims print will now be the most important market data point (more on that tomorrow). So a solid dose of realism after economists, the market, and the public have underestimated the impact of the virus from day one and the hit to demand, not just supply, from shutting cities (financial centres) down and promoting isolation. Not to mention healthcare which is already putting in a heroic effort.

This going to smash small and medium-sized businesses. Globally, it is going to see huge job layoffs, and the wash-up is this will be far worse than the GFC and central banks are powerless to stop the run. The US Senate has passed the Phase 2 Stimulus and we will see Phase 3 being voted on this weekend, and it’s a great start, with the next $1.2t bill in the works and there will be far more – by the time we see a recovery, and that will happen, the fiscal response will ultimately be 3, maybe 4x that figure. We worried about the US running a fiscal deficit before…try looking at that at $4t. The fact is, in times of war, which Olivier Blanchard (ex-chief economists at the IMF) portrayed this as a “quasi-war”, you forget about deficits – worry about it another time. 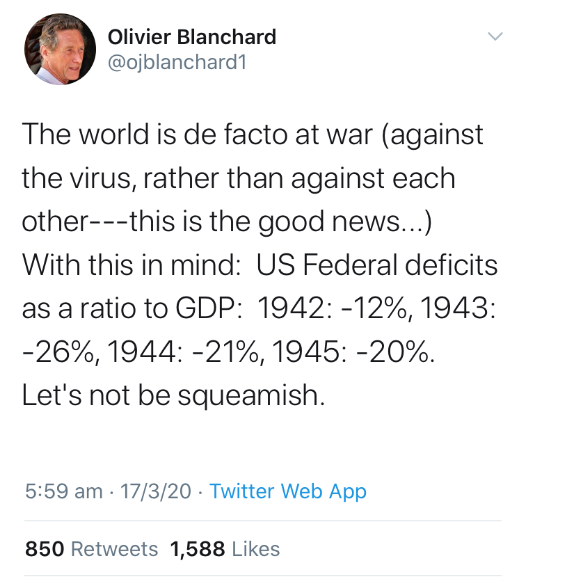 The markets have formed a liquidity vacuum, with all the talk of lockdowns in London and NY, which of course, are the two big financial centres. Liquidity was already shot to pieces, and the big players were struggling to get out of positions of any size, but now the perception/reality of trading desks being limited and personnel WFH is causing traders to flee everything – money market funds/cash is king.

The markets have been liquidated, although there has some buying into the close and I suspect this Tweet from Larry Kudlow – “GOVERNMENT MIGHT TAKE EQUITY POSITIONS AS PART OF AID” has helped…that could be big, although won’t cure the virus.

The USD is the story here….it’s on the rampage and taking no prisoners. Swap lines have been implemented from the Fed to other key central banks to give easy access to USDs, which has eased USD funding costs (USD negative), but the USD goes one-way and it’s all USD buyers here and that is killing EM – Recall, these guys have huge USD liabilities/debts and a stronger USD just makes that debt pile even greater.

We simply can’t have a one-way move in the USD when global markets are tanking and inflation expectations are getting smoked – In the near-term, we watch for the roll-out of a new Term Auction Facility, which should reduce funding pressures, but there has to be a more collective response to stop this.

AUDUSD is trading 0.5794 (-3.4%), having been as low as 0.5702 and this reflects a stronger USD and the fact EM and industrial metals are getting clobbered. At 14:30 AEDT the RBA will announce a rate cut of 25bp, perhaps even to 0%, but it matters little. They will announce QE, but the market will shrug that off unless it is lightweight in which case they’ll probably sell AUD, even if that makes no sense…

The moves in the markets will impact the household in a big way and will stop people from spending…adding to the demand shock. The reality is dawning now and for many, it will take years to get over this financially, and that’s before we consider the sooner-to-seen layoffs in the hospitality and services sector more broadly. We need to hope the govt can hold the brittle social fabric together, certainly, that is the case in the US.