Asian equities were mostly firmer on Tuesday, with Japan the only exception, pulled down by a stronger yen. Shares in Europe look set for a positive start on Tuesday ahead of the latest Q1 Eurozone GDP reading as well as trade data from France and Germany. Futures point to a weaker open on Wall Street on the first day of the Fed’s two-day monetary policy meeting.

US stock markets look to have turned into FOMO-mode now. Investors and money managers who missed the rebound are scrambling to get into the action. Some of the riskiest shares like airlines are now outperforming under the ‘reopening trade’. Boeing was top risers on the Dow. At the same time, some of the ‘coronavirus trades’ like Netflix are underperforming. With 1000s retuning to work in hard-hit places like New York City, investors are looking to the other side of the pandemic. Among the top gainers were Tesla shares, which reached a new closing high.

Share performance in Europe has been lacklustre by comparison. Initial optimism about the new stimulus introduced in Europe has given way to unease about a possible institutional fistfight between the ECB and the German Constitutional Court.

The New Zealand dollar (NZD/USD) hit a new 4-month high on Tuesday after New Zealand ended all social distancing measures, saying it had eradicated COVID-19 in the country. The only thing that remains is its closed border. The Aussie dollar joined in the regional gains, touching a 10-month high.

It sounds almost facetious to say the British pound has risen to a near 3-month high as British pubs get set to reopen. Clearly, other factors are at play; hopes for a compromise on trade with the EU, and weakness in the US dollar. But reopening pubs is a huge deal for the UK. The pound had been lagging over the last two months, in part over the severity of the coronavirus outbreak in the UK versus some other parts of Europe like Germany. Pubs symbolise a return to normal life in the UK and will play a huge role in returning consumer confidence to pre-pandemic levels as soon as possible. 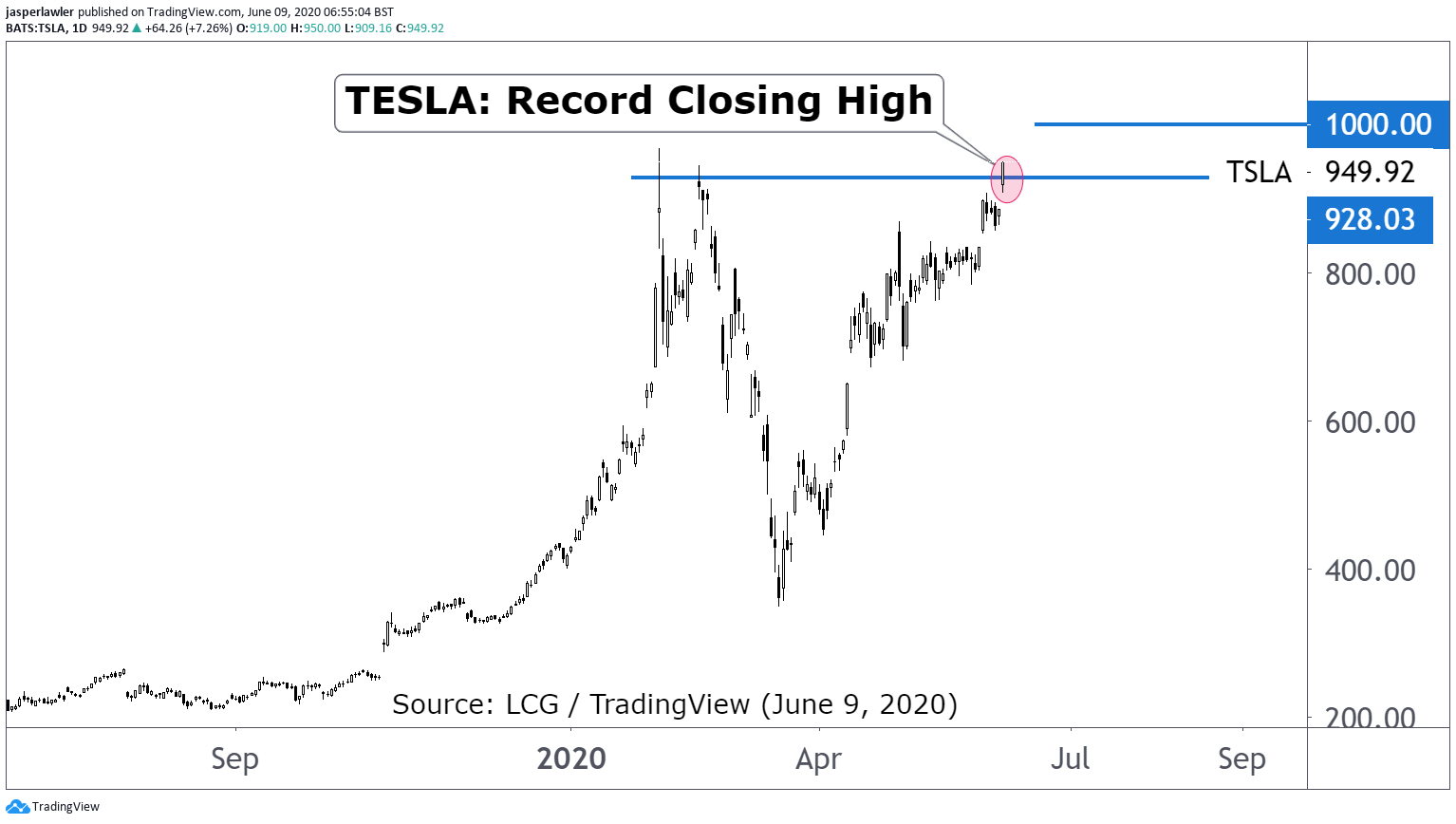 TSLA shares have been among those driving the gains in the Nasdaq- having reached a record close on Monday. A New All-time high above 968.85 then $1000 per share are potential upside targets.