Ripple cryptocurrency continues to rise after the earlier upward reversal from the support zone lying between the round support level 0.900 (which has been reversing the price from the middle of September), lower daily Bollinger band and the 61.8% Fibonacci correction of the upward impulse 1 from the middle of July. The upward reversal from this support zone stopped the previous short-term ABC correction (ii).

Given the improved risk sentiment seen across the cryptocurrency markets today, Ripple cryptocurrency can be expected to rise further toward the next resistance level 1.1000 (top of the previous short-term ABC correction (b)). 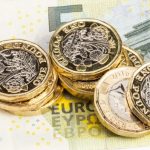