Risk sentiment is being driven by hopes that central bankers and governments will rescue the markets as long as needed. Investors are currently anticipating the bill approving one of the biggest stimulus packages in the US. Global equities were mostly in positive territory yesterday with its first back-to-back gains in more than a month. However, the risk sentiment will remain dependent on the number of new virus cases and the pace of growth. 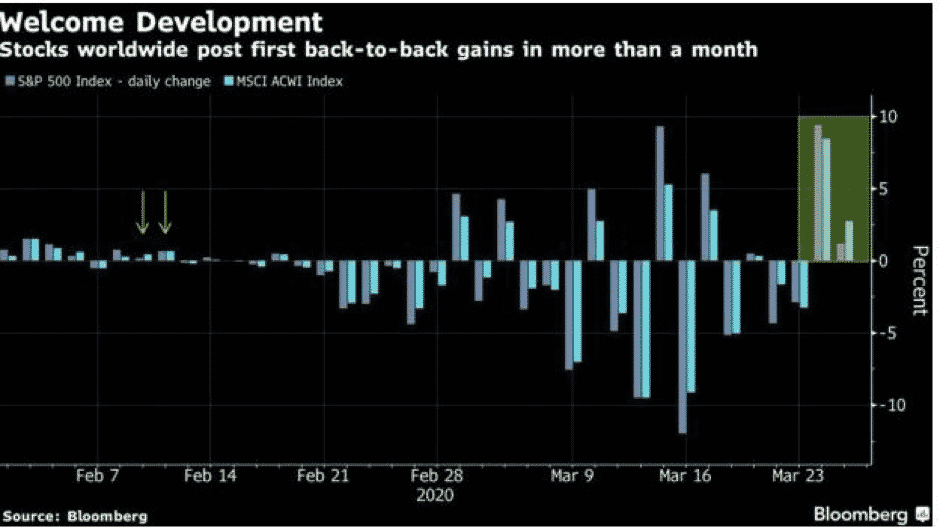 However, it is not yet a sign of a lasting rebound. Extreme Volatility will likely continue to prevail!

In the FX market, major currencies were stronger against the US dollar. Risk appetite in the financial markets has tamed the haven flows of the greenback.

The Canadian dollar was among the best performers as a recovery in oil prices and a weaker US dollar dragged the USDCAD pair by almost 300 pips from 1.44 to 1.41 level.

The Aussie dollar traded relatively flat amid a lack of fresh catalyst and an empty economic calendar. The AUDUSD is trading in a relatively small range below the 0.6000 level awaiting a fresh trading impulse as Australia is also struggling to impose more stringent measures to contain the virus.

The recent stability in crude oil prices is mostly driven by emergency stimulus packages. However, the narrative for the oil market has not changed much. Prices continue to remain under extreme pressure dragged by a simultaneous demand and supply shock.

On the geopolitical front, we note that the Trump administration is pushing for Saudi Arabia to tame down its plan to flood the oil market. It is also reported that the US and Saudi Arabia may be setting up an oil accord. As of writing, Brent Crude and WTI are trading sideways around $27 and $23 levels.

Overall, the sentiment around precious metals is quite positive. Gold traded back to the top of the range seen at the beginning of the year. The liquidity crisis remains the focal point for the precious metal. Traders are monitoring the giant US aid package and the pandemic will provide for next trading impulse.

Gold was weaker on Wednesday but is consolidating around a key psychological level at $1,600. 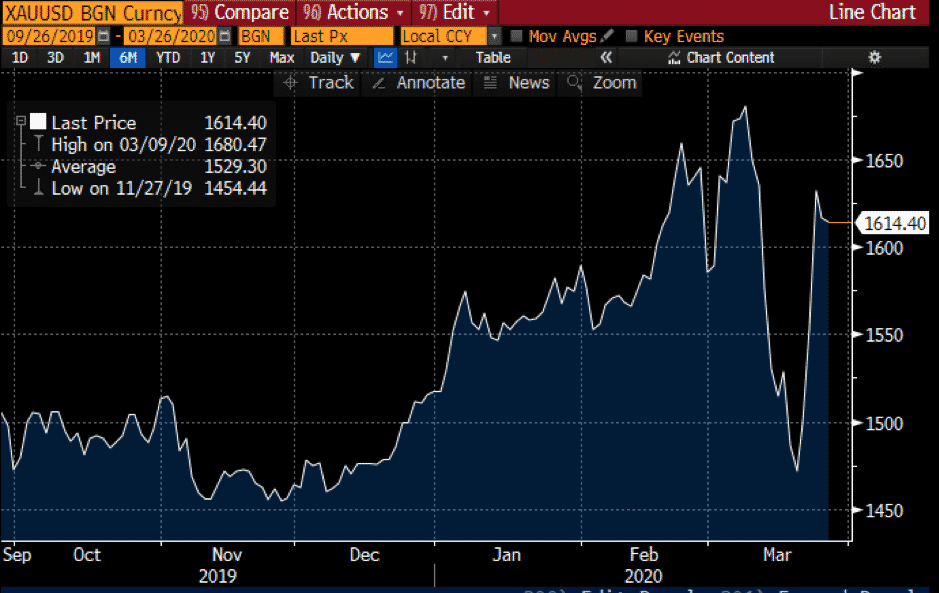 However, a bearish environment will prevail for crude oil prices until there is more stability on the geopolitical front. Amid the oil price war, traders are looking for clues that Saudi Arabia and the US will reach some sort of agreement to rebalance the oil markets.

Gold has maintained its upside momentum after investors have been reassured that central bankers and governments are injecting liquidity in the markets. The precious metal is on track to recoup the losses made in the past two weeks. As of writing, the XAUUSD pair is trading above the $1,600 level.