The hopes of further stimulus, the Federal Reserve’s “infinite” QE program and unprecedented moves to get credit flowing in the economy have provided some support to the US stock market. On Tuesday, it was reported that the differences on the multi-trillion emergency package is being addressed and could be settled soon. Given the pace of the number of cases and the current impact of the coronavirus, the massive stimulus package would bring some calm to the financial markets. However, it should be highlighted that risk sentiment remains fragile as it is dependent on whether the virus spread will worsen more than anticipated or not.

Major US equity benchmarks experienced significant rebound with the Dow surging the most since 1933: 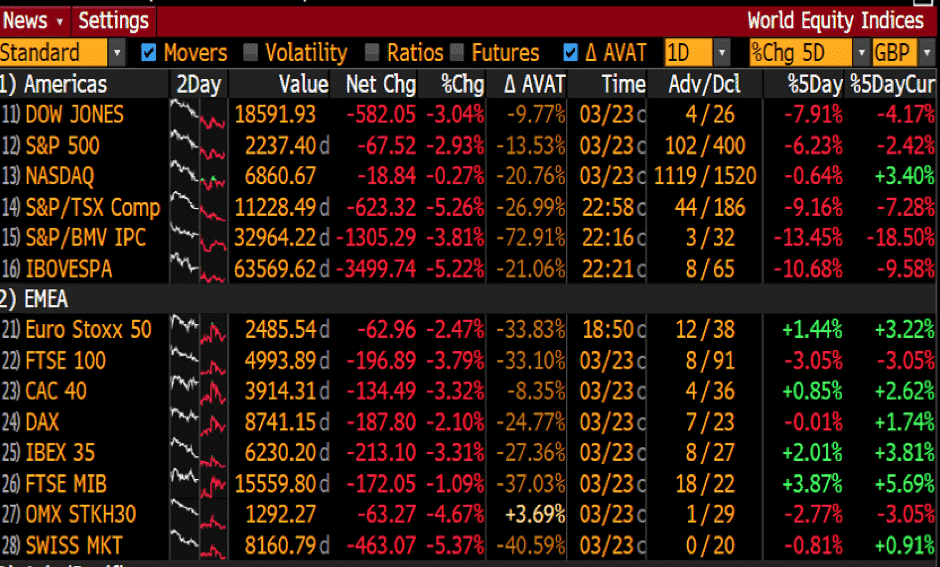 As more countries are rolling massive stimulus package to stem the crisis, investors are not convinced that the fiscal and monetary intervention measures are enough to provide economic support for the global economy.

In the FX market, major currencies were mixed against the US dollar. As global equities recovered a semblance of normality, there was less demand for haven currencies overnight. The British Pound and the Antipodeans were among the best performers.

The Aussie dollar continues to rebounded slightly lifted by an improvement in risk sentiment and a weaker US dollar. As of writing the AUDUSD pair is currently trading at 0.5980 level. However, the rout in the commodities market and the RBNZ’s announcement of NZD250m of quantitative have hammered the buyers’ attempt to reclaim the 0.6000 level.

The New Zealand dollar found intermediate support from a better-than-expected Trade Balance data and RBNZ’s bond-buying purchases. The kiwi is currently buying at 58.40 US cents.

The British Pound bid well against the US dollar and the Euro amid a broad-based improvement in risk. The UK is finally in lockdown which also brought some reassurance that the Prime Minister is taking action to limit the spread of the virus. However, on the data front, the PMI figures are indicating that the UK could be heading into a deep recession.

The narrative for the oil market has not changed much. Prices continue to remain under extreme pressure dragged by a simultaneous demand and supply shock. The overall optimism helped Brent Crude and WTI to rebound and consolidate around $27 and $24 levels.

However, a bearish environment will prevail for crude oil prices until there is more stability on the geopolitical front. Amid the oil price war, traders are looking for clues that Saudi Arabia and the US will reach some sort of agreement to rebalance the oil markets.

Gold has maintained its upside momentum after investors have been reassured that central bankers and governments are injecting liquidity in the markets. The precious metal is on track to recoup the losses made in the past two weeks. As of writing, the XAUUSD pair is trading above the $1,600 level.