A controversial new security law in Hong Kong and no China GDP forecast are refueling the concerns over US-China relations. Hostilities between the two biggest global economies have unearthed some caution in the second half of the week.

Shares in Europe have opened weaker on Friday. Another monthly crash in UK retail sales and government borrowing at a level of nearly 100% of GDP pulled on British blue chips. Grocery shares dropped alongside the dire retail sales figures, but those with a significant online presence like Next and to lesser extend Ocado fared better. Rising chatter of negative interest rates and a pullback in oil prices are weighing on bank and oil company shares. Automakers like Daimler and BMW with exposure to China were the biggest fallers on the DAX. Lufthansa is bucking the trend with small gains as optimism holds up for a government rescue.

Shares in Hong Kong dropped more than 4% on Friday, outpacing other declines across Asia. The dollar edged higher to the detriment of the Chinese yuan and other Asia FX. China is pushing through a ‘sedition’ law for Hong Kong in the name of ‘national security’. The decision came at its National People’s Congress annual gathering. The law sets up the possibility of a clash between Chinese security and pro-democracy demonstrators in Hong Kong, as well as a review of the city’s special trading relationship by the US. Both stand to cause prolonged underperformance in the Hang Seng. Separately, China announced it would not set a GDP target for this year and reiterated it would meet commitments in its phase one US trade deal.

If Trump were impersonating Alec Baldwin, not the other way around, he might change the line ABC (Always Be Closing) to NBC (Never Be Closing)!. President Trump, while touring a Ford factory on Thursday, said: “we are not closing our country” if there were to be a second wave, while also admitting a second wave is “standard” for a contagious virus.

There had been a view in markets that reopening is an unadulterated good thing; the President’s determination not to close again if necessary could change that. The comments reflect a growing divide – not just in Washington – but also in the population over which is worse for people’s health and prosperity –another lockdown or the virus itself. This debate could be central in the November US election if indeed second waves do occur. Shorter-term, the immediate implications are that the Democrat-proposed stimulus bill probably doesn’t pass the Republican Senate.

Shares of Amazon fell 2% on Thursday after touching a record high, pulling Wall Street lower in the process. Facebook shares also hit new records, while Alibaba shares fell 2.1%. If you own shares that are reaching new highs in this kind of environment, you probably won’t want to push your luck. Some profit-taking makes sense. What hasn’t been evidenced yet is any concern over the implication of Facebook shops for Amazon. For now, Facebook isn’t selling itself but offering storefronts for businesses – but half of the sales on Amazon are by third parties. If any company can create a big enough marketplace of sellers to upturn Amazon’s dominance of ecommerce, its Facebook.

The S&P 500 has recovered over one-third of its value since the March 23 low. A common question has been ‘How are stock markets doing so well in the face of such historic job losses?’ We don’t exactly answer the question – but there is a frame of reference to be had from comparing the S&P 500 with the Nasdaq Composite and the Russell 2000. The Russell 2000 is a broader section of more domestic US companies and is up from the March low, but significantly less than the Nasdaq, which is heavily influenced by tech companies who have been less impacted by the pandemic. 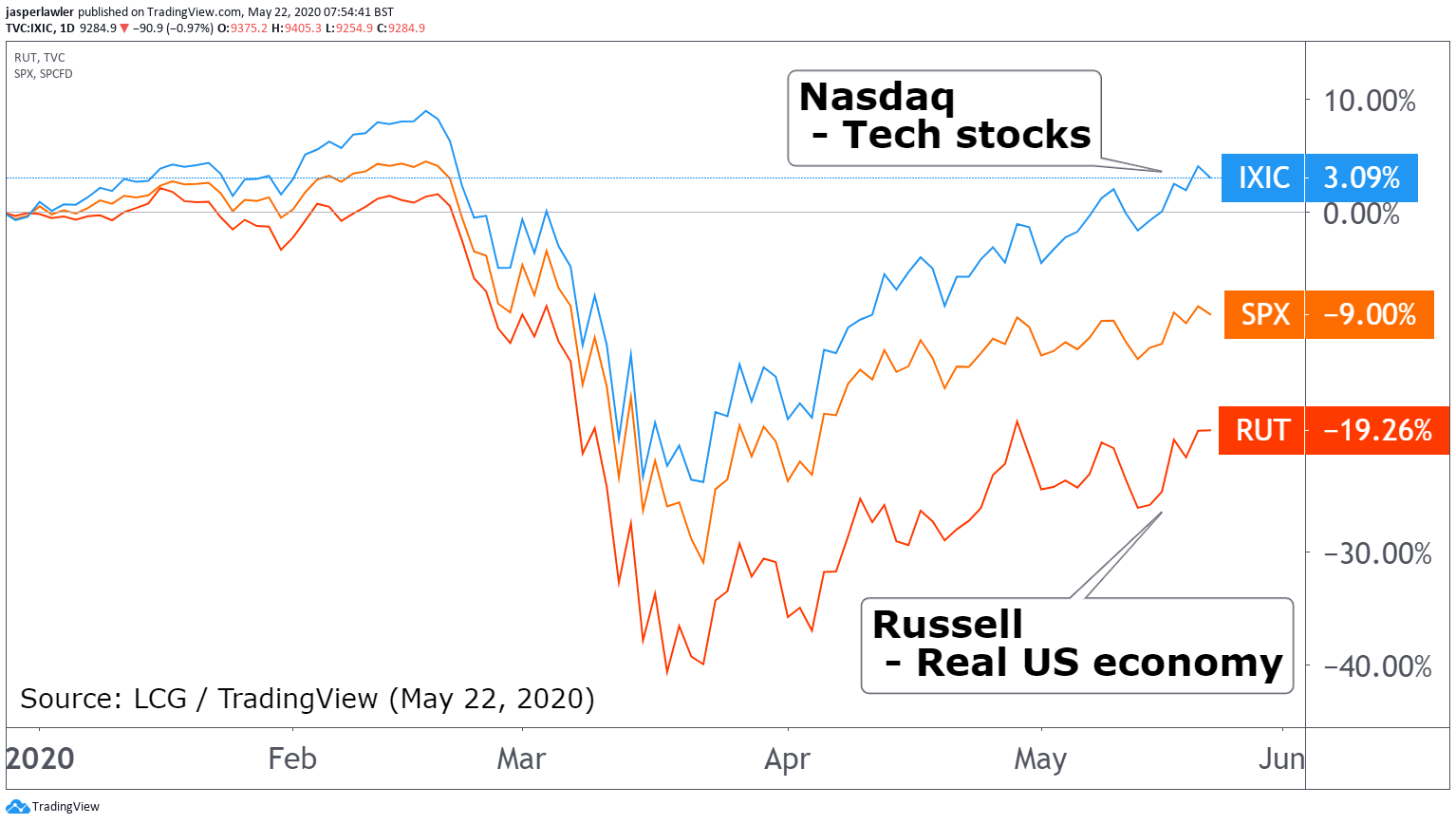