“I just wait until there is money lying in the corner, and all I have to do is go over there and pick it up. I do nothing in the meantime.” – Jim Rogers

European shares look headed for a softer start. AstraZeneca will be one to watch on the FTSE over plans to buy Remdesivir-maker Gilead Sciences. The DAX is pointed lower as investors await new information on German industrial output in April. Shares in Asia were mostly higher after China reported a record trade surplus. Futures point to a stronger open on Wall Street.

It will be a challenge to maintain the sheer optimism on display from Friday. The blowout jobs report has got economists talking about V-shaped recoveries. All the while, the market has been doing its own V. The record high in the Nasdaq index is astonishing but had looked like a growing inevitability since crossing above its 200-day moving average.

AstraZeneca wants to be the go-to COVID treatment company. That’s according to a weekend report from Bloomberg that said Astra had contacted Gilead Sciences about a merger. AstraZeneca with the vaccine and Gilead with Remdesivir as a treatment. The combination would be valued at over £200 billion.

It would be the first Corona-mega merger. What better time to have the biggest ever health-care deal than in a global health crisis? With central banks keeping financing costs pressed into the floor but a cloudy economic outlook, M&A as a path to growth will be tempting for many big firms. There are some clear practical constraints on completing such a big deal with travel restrictions in place. That would suggest any deal would be quite some way off, potentially (hopefully) even after the pandemic has passed.

Dollar down with havens

The US dollar ended Friday higher but finished its third week lower. Investors are backing off from havens like US Treasuries and the Japanese yen and are no longer scrambling for dollar-liquidity amid the smooth-sailing in markets. Gold prices could be teetering on a bigger decline, having dropped decisively below $1700 per oz.

Oil prices have edged up after OPEC agreed to extend existing cuts for another month. One month doesn’t really move the needle but shows OPEC+ is still in the game. The critical ingredient for the price of oil is the belief in economic recovery; OPEC just needed to hold steady. 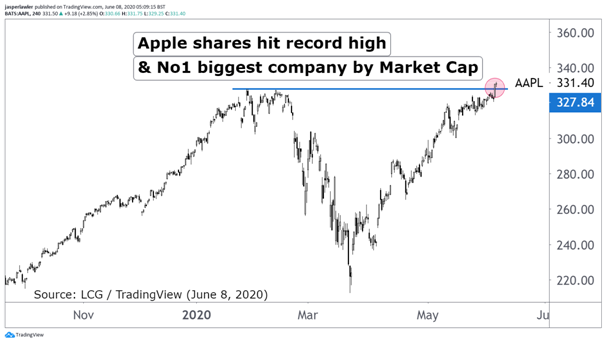 As the Nasdaq reached record highs – so did Apple (AAPL) – reclaiming its title of the largest company by market capitalisation from Microsoft.