Balance of Payments of the Republic of Lithuania for Q1 2020

The current account balance (CAB) has been in surplus for a number of consecutive periods. It grew almost 3.0 times over the year, reaching €772.0 million at the end of the first quarter, or 6.9% of the gross domestic product (GDP). This reflected the surplus on the balances of services and secondary income, which offset the deficits in foreign trade and primary income. A year prior, the CAB amounted to €259.7 million, or 2.4% of GDP (see Chart 1).

Although there was an annual increase in the CAB surplus in the first quarter, it decreased by 1.6 times compared to the previous period. This was influenced by the surplus primary income becoming deficit as a result of a significant decrease in the European Union’s (EU) subsidies for agriculture. In addition, the positive balance of secondary income has also decreased.

The surplus on the capital account widened by 10.2%, to €134.5 million over the year. This was a result of transfers received from EU structural support funds dedicated to financing investment projects.

The positive net flow of financial account investment year on year increased by about 4.6 times and amounted to €934.1 million, or 8.4% of GDP (see Chart 2). It was driven by the net positive €1.0 billion flow of portfolio investment, the result of a faster decline in liabilities to non-residents than financial assets abroad. Liabilities decreased as Lithuania redeemed the largest issue of Eurobonds in February.

The negative international investment position amounted to €11.3 billion at the end of Q1, or 23.1% of GDP.

Chart 1. CAB and its composite flows as a percentage of GDP 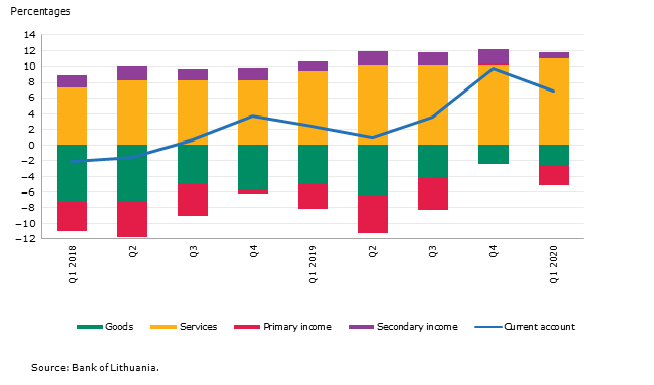 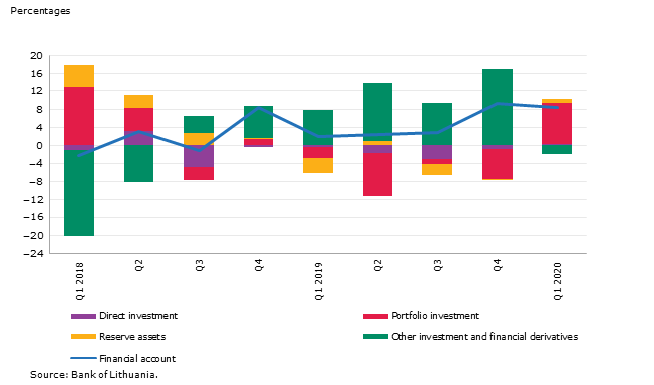 TAGS: balance of paymentsBank of Lithuania