With more than 25 years of experience, Stephen has a deep-seated knowledge of G10 and Asian currency markets as well as precious metal and oil markets. He is regularly called upon by leading TV, radio and print publications to offer his views on the financial markets. Stephen appears extensively on global news channels such as Bloomberg, BBC, Reuters, CNBC, Sky TV, Your Money, Channel News Asia, CNN, France 24 and ASTRO Awani. As well as published in prestigious publications, the New York Times, Wall Street Journal and The Economist, among others. 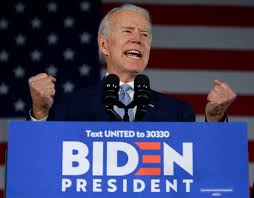 Wednesday’s ‘Biden bump’ has been short-lived, with the S&P500 down 4% heading into the close, waxing and waning in negative territory throughout the session as investors fret over a Covid-19 tip of the iceberg scenario.

Investors are starting to price in worst-case scenarios, anticipating that the spread of this virus will grow through Europe and the US, and are now accelerating their hedging game plans for the eventuality of the Eurozone falling into recession and the US economy stagnating in the first half of the year. With no material developments around the virus itself overnight, assessments of the economic costs look to have weighed on sentiment as the reality set in that a significant chunk of global GDP is set to go up in flames.

One of the more damning reports came from the International Air Transport Association signaling the industry was in a ‘crisis zone’ on the collapse in passenger demand, with the potential for losses in industry revenue between $63 and $113bn in 2020. And as more of these profit warning reality checks roll in, all hopes continue to fly out the window.

OPEC is recommending the existing cut agreement be extended through 2020, with an additional 1.5mb/d cut implemented by the end of June, split 1mb/d OPEC and 0.5mb/d non-OPEC. Assuming Russia signs up, this should stop the oil market carnage – until the next piece of bad news about the spread of Covid-19.

The headline reduction is bullish vs expectations (~800kb/d cut), but oil prices have given up gains that initially followed the OPEC news because of uncertainty on Russian willingness to commit to a pro-rata share that would be bigger than anything they have contributed so far (the bulk of the incremental 500kb/d cut would have to be from Russia). 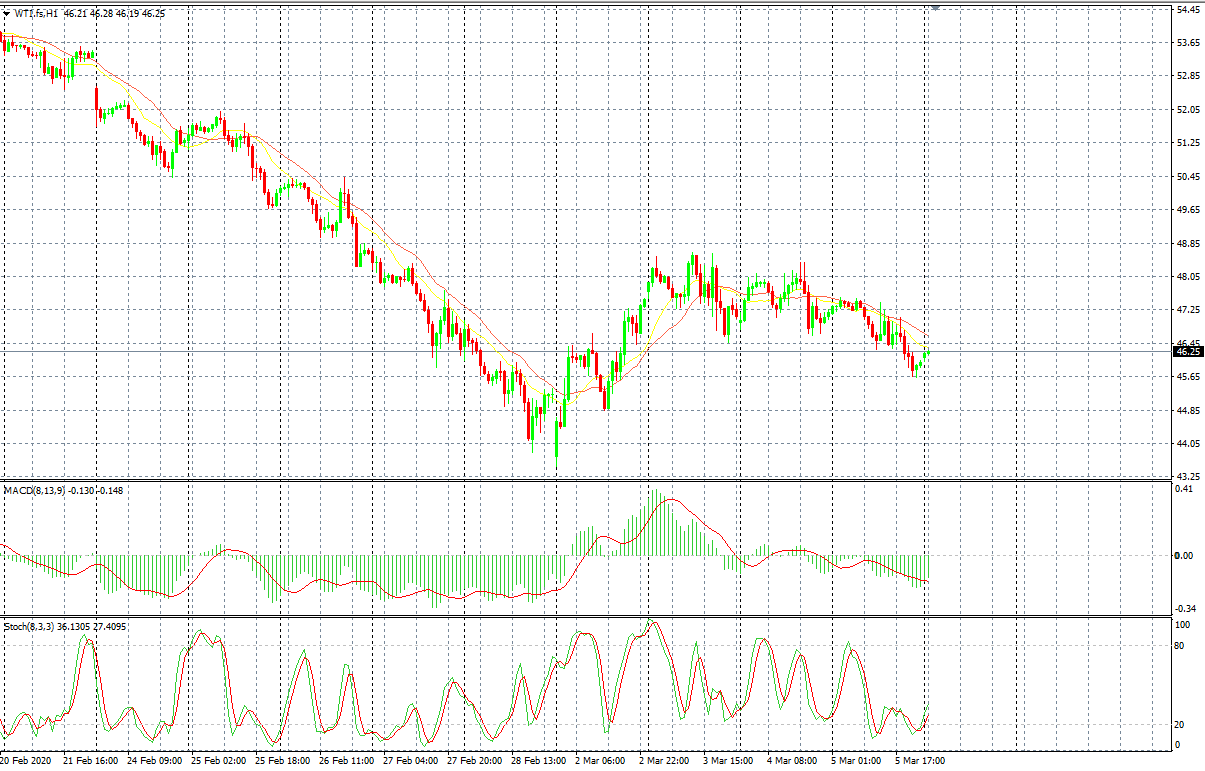 With no specifics yet, I’d estimate a Russian cut would have to be about 350-400kb/d, against the existing commitment of 300kb/d (which they struggled to meet and maintain).

Even a smaller Russian cut would mean a more substantial reduction than I think consensus expected, but the optics of a disagreement with Russia will mute any bullish impact.

The OPEC+ meeting on Friday will involve Russia and other non-OPEC participants in the current agreement. I’d expect Russia to fall into line as we always seem to be dancing to a broken record when doing Saudi Arabia and Russian compliance tango during OPEC meetings.

Assuming the deal goes through, below is a rehash of yesterday’s daily evolving market views:

Assuming a breakdown in the deal:

WTI falls to $40 where it could then find some support at a level that could downsize US drilling activity significantly from a break-even scenario.

Gold looks like one of the most attractive assets in this global environment. With US rates likely heading towards the “zero lower bound” this should mean both retail and institutional investors’ portfolio allocations in gold will rise exponentially.

The 50bp Fed cut gave gold a significant boost as US yield plummeted, which has continued to contribute to a surge in ‘fear-driven’ investment demand for gold. 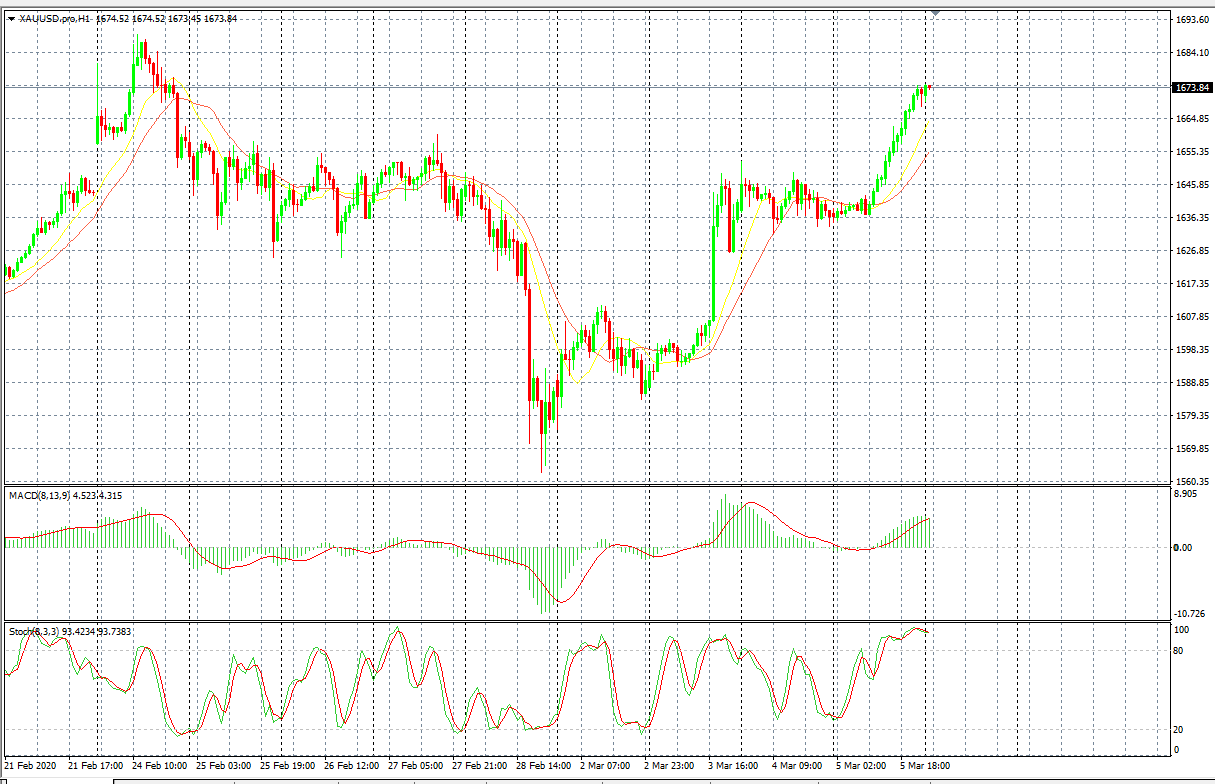 Positive momentum in XAUUSD favors a test of $1690-$1700 – and possibly higher on another aggressive round of stimulus by central banks worldwide, with the market now pricing in more rate cuts around the globe and the JPY -XAU correlation re-established where Yen safe-haven bid is accelerating tangentially to the Covid-19 outbreak spread. So, with the weaker dollar narrative kicking in, gold could easily moon shot significantly higher as the stars align for gold investors this week.

Th BoJ is out of credible monetary options. As such, USDJPY downside is attractive both from a front-end rate differentials perspective vs the US and on the potential for a safe-haven bid as risk aversion accelerates tangentially to the Covid-19 outbreak spread. 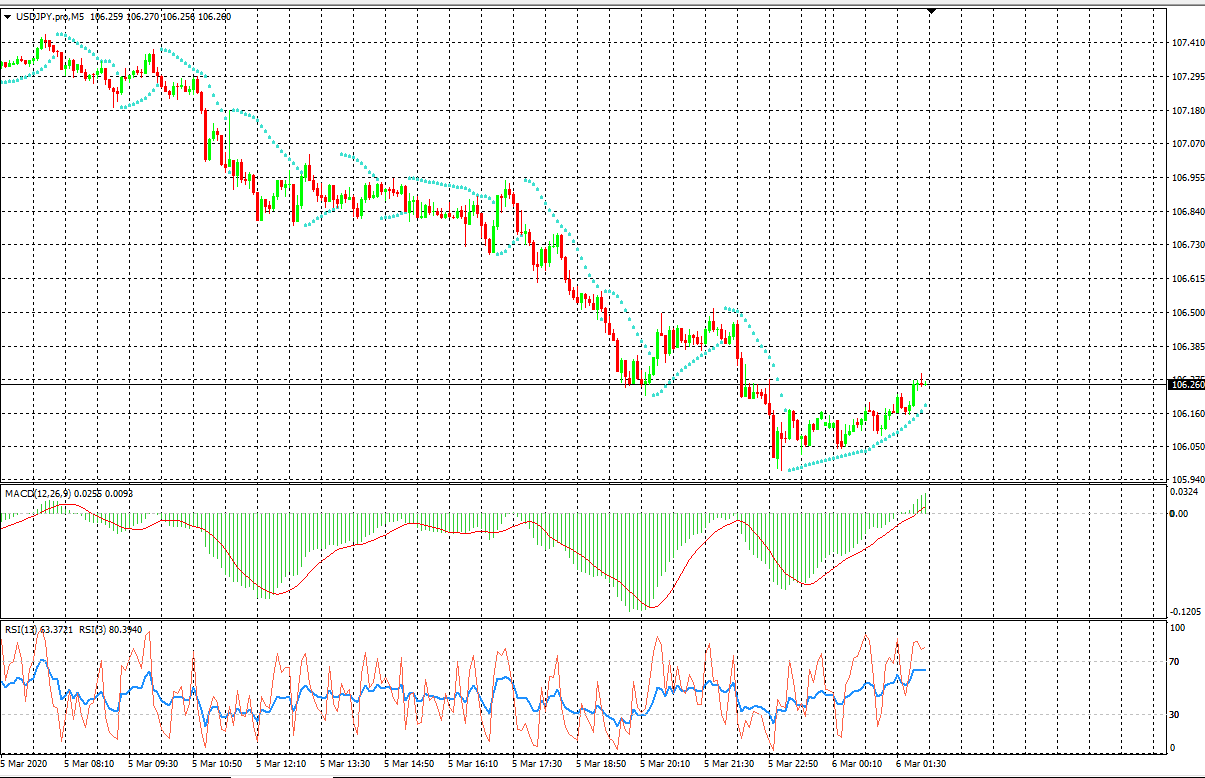 The linear correlation of risk-off driven by both demand fear and actual economic cost of the virus will continue to drive flows into the Yen. Still, as we approach 105.50 (possibly the BoJ’s line in the sand) the more likely we can expect a Bank of Japan intervention response. But with few traditional bullets left in their arsenal, any form of overt intervention may do little more than offer traders with better levels to buy the Yen.

The Euro and JPY are trading very much on a simmer differential to the US tangent but the Euro bears the position overhang from discretionary traders. Those fast money types who were in at the lows (<1.09-1.10) have been reducing from a max short position that was hit eight weeks ago, and there are still more to go.

It seems pretty clear that we have transitioned to a new playbook for EURUSD, one where it’s not just the US equity and the TINA effect inflows driving the dollar up day in day out. Rates seem do seem to matter again. EURUSD was divorced from the interest rate differential for ages as the nominal US rate advantage remained huge versus the rest of the G-10 world, while at the same time tech inflows and Eurobond issuance created an insatiable demand for dollars. 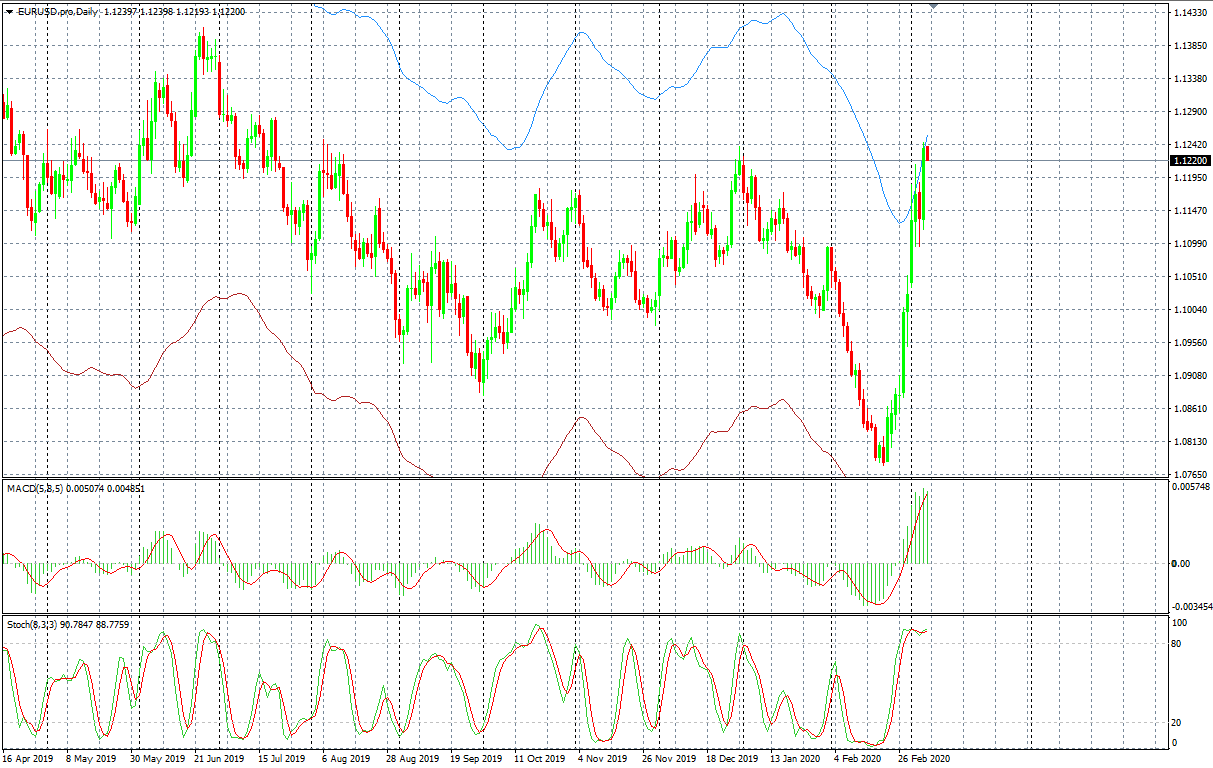 But all that US exceptionalism stopped on a dime when Covid-19 showed up on the doorstep of the US market.

While there are a few ways to slice and dice the rate differential story on the EUR vs. USD, with EURUSD vols looking to move higher the Euro loses its funder appeal. The one-year forward to vol carry ratio is working against the short Euro now and that critical ratio was the prime reason for The Big Euro Short (EUR).

Global risk aversion and lower oil prices on the back of Russia failing to commit to OPEC compliance will take the shine off the Ringgit’s newfound lustre today as Covid-19 fear continues to sweep the world.

Indeed, AsiaFX is possibly replacing the USD in being viewed as the cleanest dirty shirt in the global currency basket. I personally don’t agree with this view as much of the positive Asian sentiment is getting beta driven by the Fed cut and USD weakness; the real bullish alpha exercise would be predicated on improving tourism and regional supply chain trend. So I’m not overly keen to chase positive moves in Asia FX until signs of a data pivot which then will drive the alpha. 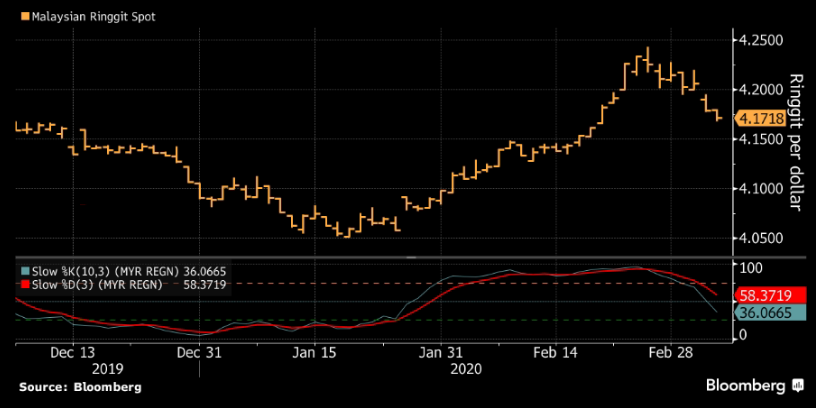 In other words, I don’t think its a good idea to chase the rally in Asia FX until the economic data pivots and tourism sensitive currencies (THB, SGD and MYR) until there are signs of the travel alerts getting lifted.

Wall Street Traders Are Tethered to the Desk with Virus Arriving

“After spending years enhancing trading desks with cutting-edge analytics, fast access to outside venues and layers of surveillance, banks are finding it’s hard to relocate their human operators, even in the face of the deadly coronavirus. With the illness now reaching New York, firms are trying to figure out what to do with armies of employees who can’t simply log in from a laptop at home.”