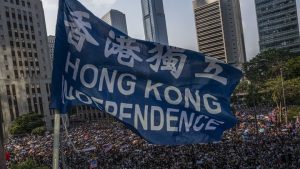 Since 1997 when the British handed Hong Kong back to the Peoples Republic of China, we have seen spouts of civil unrest, mostly due to the regime change. We have seen numerous times images of protests and riots occurring periodically with civilians clashing with police and military personal at various times.

In the past year we have seen these riots escalate, and extraordinarily it has resulted in the local Hong Kong economy falling into a technical recession as rioters fill the streets and cause general mayhem. Many of the businesses targeting by rioters have been Chinese owned subsidiaries, but the fact remains that while the demonstrations do cause harm to Chinese business, they have also damaged Hong Kong local enterprises.

In September 2019, some of the riots had reached a tipping point at least from a business perspective, nearly a quarter of businesses had started to consider the possibility of leaving Hong Kong behind and to establish new roots somewhere else. More than 80% of businesses felt that they had been impacted by the riots and seen the impact directly on their wallets.

To some effect the COVID-19 pandemic has helped quell the unrest for a time, but it has still left its mark on earnings. Now, new national security laws are set to be imposed and the rioting has begun regardless of the threat of infection.

So, what are the new laws China is imposing? The national security law is targeting acts that are deemed to be against the state, essentially any behaviour that is seen to be undermining China’s authority. One such example that has been provided, is for those who may pervert or mock China’s national anthem, of which those offenders will spend 15 days in lock up.

Hong Kong is now bracing itself for pro-democracy protests across the Chinese province, and the concerns of local businesses are rising. This causes great concern for the future of Hong Kong’s future as a financial hub and gateway for Chinese trade.

Adding fuel to the fire the President Donald Trump, has indicated that he may very well seek to place economic sanctions on China. Regardless of whether Trump intends to hit through tariffs, asset freezes, visa’s or the removal or diminishing of special trade statuses the true fallout is going to be left at the steps of the Hong Kong citizens. Any actions taken by the US or the rest of world are going to see some level of blow back on Hong Kong, and that is likely to be through reduced foreign investment and the relocation of major entities.

While the description above does not encapsulate the whole problem facing Hong Kong, it certainly paints enough of one to speculate on its future as a vibrant city and business hub.