Trader thoughts - a world without buybacks and dividends

There seem to be two clear factors in play today. The first is the level of concern expressed in yesterday’s Trump statement that “this could be a hell of a bad two weeks and maybe three weeks”. Trump’s call that we could be seeing some 100,000 to 240,000 deaths falls in-line with Dr Birx, the White House COVID-19 task force coordinator, who expressed similar numbers earlier.

The fact the US has now surpassed the 200,000-case count now, and deaths rising by 660 to 4713, with 7729 new cases in NY alone, is not helping matters. The market is realistic that the economic data is going to be hit hard from here, as will the health services, with the Russians sending in a military transport plane to help the US with the fight against the virus.

There was little reaction to the US ISM manufacturing, even though, like China’s manufacturing it smashed expectations of 44.5, coming in at 49.1. A closer look at the sub-components showed the ‘supplier delivery’ index lifted to 65 (from 57.3), and this almost single-handedly supported the full diffusion index. The sub-components we care about here are new orders (which fell from 49.8 to 42.2), new export orders (51.2 to 46.6), and production (50.7 to 47.7) and these all tell a different story. Anyone who bought risk after initially seeing this data point, quickly closed when they had a proper look under the bonnet. This is no different from Korea, UK, German and the broader European data.

The fact is economic data will get worse; but how much is being priced into markets is the subject of debate. This Friday’s US payrolls, for example, will be awful, with consensus calling for 100,000 net jobs lost. We’ll see another weekly jobless claim tonight at (23:30aedt), and again these numbers will make incredibly sobering reading, with 3.6 million new claims expected …but the market is already pricing this and it should promote little reaction. Boston Fed President, Eric Rosengren, hit the nail on the head overnight by detailing he sees unemployment above 10% by the end of June. He then went onto say the “economy can recover faster when the public is confident about efforts to stop the virus from spreading”.  When we get near to that point we’ll know.

European markets will offer no support either, with the DAX -3.9% and DAX futures falling further since the cash close. German equity index futures are on the radar, as we see price threatening to break the recent consolidation low and that will have big bearings for the DAX, and European equity markets more broadly.

The Aussie SPI futures are working in what progressively looks like a bear flag pattern and looks to be breaking down here, which would suggest a continuation of the bearish move from 21 Feb to 23 March. We watch, as the ASX200 was a rock yesterday, but will we see sellers on open and will the index play catch up, with a fall of around 3.5% expected.

We’ll keep an eye on Japan and S&P500 futures through trade – the question of whether the US index goes to test the March lows will be all the talk today. The fact small caps were savaged, with the Russell -7% is a concern too. 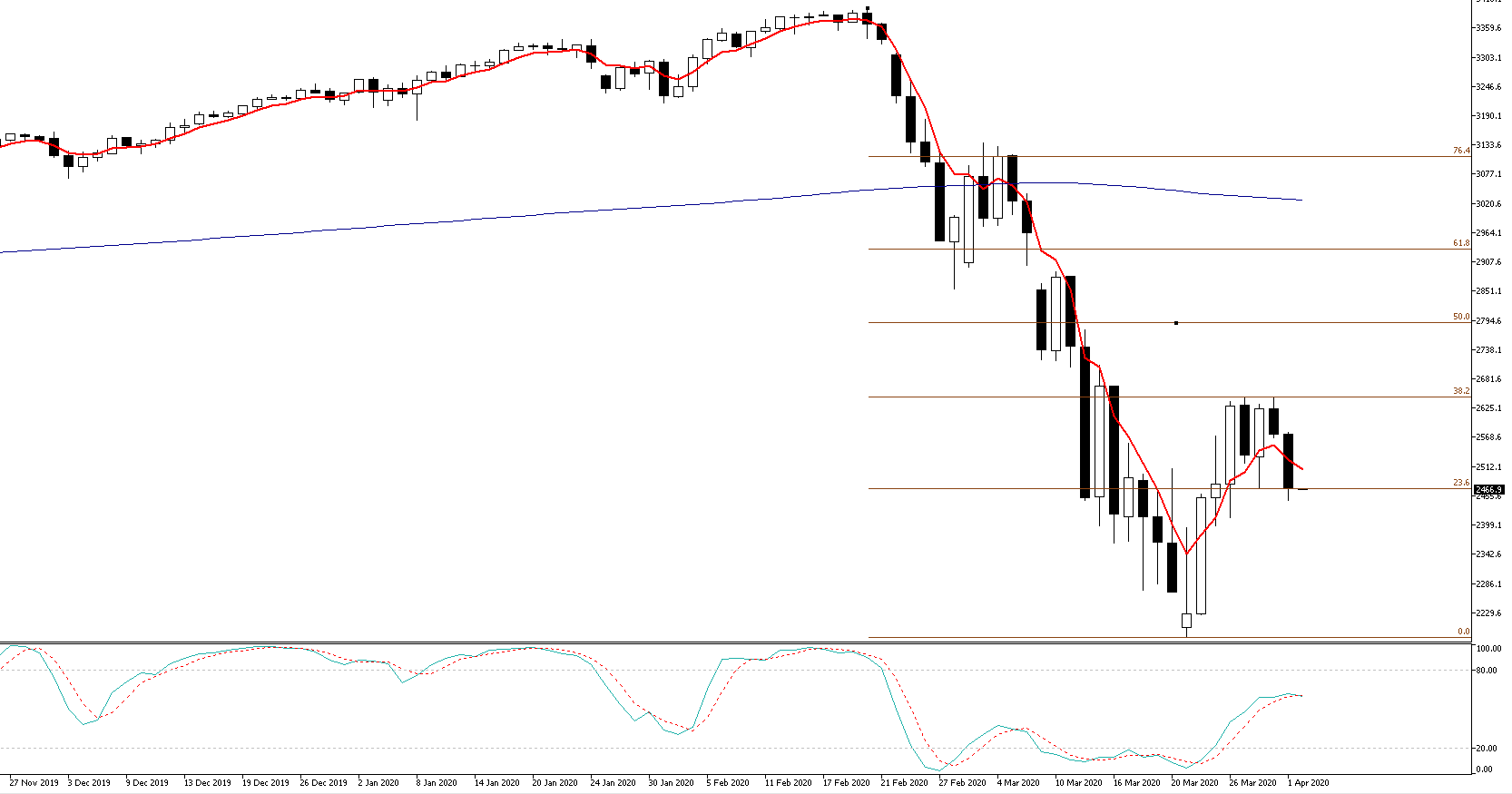 Earnings estimates are too high

It leads me to my second concern bearish catalyst – earnings estimates are too high, specifically in the US, and the catalyst here is that earnings season is only just around the corner, with JP Morgan starting the ball rolling on 14 March. Consensus forward EPS at $158 suggesting a mere 11% earnings contraction through the year, and when we’re hearing of companies curbing buybacks, and shelving dividend plans, then we should expect this to resonate through earnings downgrades too. The idea of understanding where the market is positioned relative to consensus earnings is one many will argue, and we’ll mark-to-market not just earnings against price, but more importantly guidance and the general tone of the earnings call.
We’ll feed off the statements from CEO’s and CFO’s, who are at the coal face, telling us how it is and how they expect things to play out.

There seems little doubt that when Standard Chartered and HSBC said they were shelving their dividend yesterday; Asia fell away yesterday, and US equity futures did too.

Scanning through markets, and one would believe that equities would have focused on credit, where the high yield CDX index is +77bp at 735 – not a great look, but the Fed isn’t buying high yield credit and this move also comes on the back of a 3.5% rally in crude – where the move in crude being the silver lining in a day of risk aversion. We see the VIX index pushing a touch higher into 57%, so the market still exporting daily moves of 3.6%. US Treasuries have been bid across the curve, with 10s -7bp and at 59bp looks to be making a renewed attack on the 9 march low of 31bp. Inflation expectations have dropped a touch, so real yields are modestly lower and this is likely supporting gold, where we see spot +0.7% and gold futures +0.2%.

I like gold here, and even though there is always some craziness around whether the bullion banks who have sold futures can source the physical metal to make right on their delivery obligation on expiration – either way, the backdrop for owning gold is as bullish as I have seen.

We look into the FX world, where the USDX +0.4% despite USD funding rates working against USD longs. That said, there are many other reasons why the USD works in a market that are in risk aversion mode and we see the greenback working fairly well, specifically, on the day against the MXN, ZAR and BRL. EURUSD has pulled below 1.10, although we were testing the 1.09 level earlier in the piece. USDJPY has been a preferred short, as detailed in yesterday’s report, and I am happy to hold shorts, with the 61.8% retracement of the March rally (101.19 to 111.68) coming in at 105.20 as a potential target.

AUDUSD has lost 0.9% and has broken its uptrend, or bear channel and a break of 0.6023 argues for a move into 0.5945. I warmed to the AUD of late, specifically EURAUD, but if equity markets are genuinely rolling over and EM is looking precarious again then the AUD is going to struggle to find many friends in this market.