Markets are putting the politics to one side and pinning hopes on a quick economic rebound once lockdown and travel restrictions are lifted. The Aussie dollar continued its multi-month surge after PMI data for China’s service sector today showed expansion, and the Australian GDP fell less than predicted. The US dollar is falling across the board as riots rage despite big city curfews and haven flows dry up. US indices are getting an extra boost from the weaker US dollar, which will sure up foreign earnings.

European shares are starting to play some catch-up with the United States. The S&P 500 crossed its 200-day moving average last week. Now Germany’s DAX has achieved that same feat. Today Germany will announce how and it will lift travel restrictions for the EU and other countries this month. If the tourism industry in Germany and elsewhere can salvage some summer holiday bookings it, adds to the economic recovery and reduces the burden of support on governments.

Tech stocks continue to carry the Nasdaq higher with gains on Tuesday, taking the index just over 1% away from new all-time highs. The broader S&P 500 is now within 10% of a new record. How far the recovery can run after such an uncertain period is unclear, but there is now a feeling that the economy has passed its worst. If we are now in a period of economic rebuilding, it stands to reason that technology firms suffered the least and are flexible and innovative enough to rebuild faster.

The one place politics could be playing a role is the US dollar. Riots and the chance of US’ troops on home ground’ in major cities (temporarily at least) disqualifies the dollar as a haven. Protests and looting are taking place in financial centres New York and Chicago, adding an extra layer of uncertainty. As the dollar declined, the euro has topped 1.12, and the British pound is over 1.26.

The Loonie is back at 1.35 to the dollar with USD/CAD, having tanked over 300 pts since last Friday. Bank of Canada’s Stephen Poloz will lead his last monetary policy meeting today before he steps down as Governor. Poloz oversaw Canada’s first foray into asset purchases this year, but that will likely lead to his successor Tiff Macklem to determine the path moving forward. At the last meeting, the Bank of Canada dropped its forecasts amid the pandemic uncertainty and suggested the economy could contract between -15% and -30% by the second quarter. We think they err towards the rosier outcome of the two today, which should lend support to the Canadian dollar. 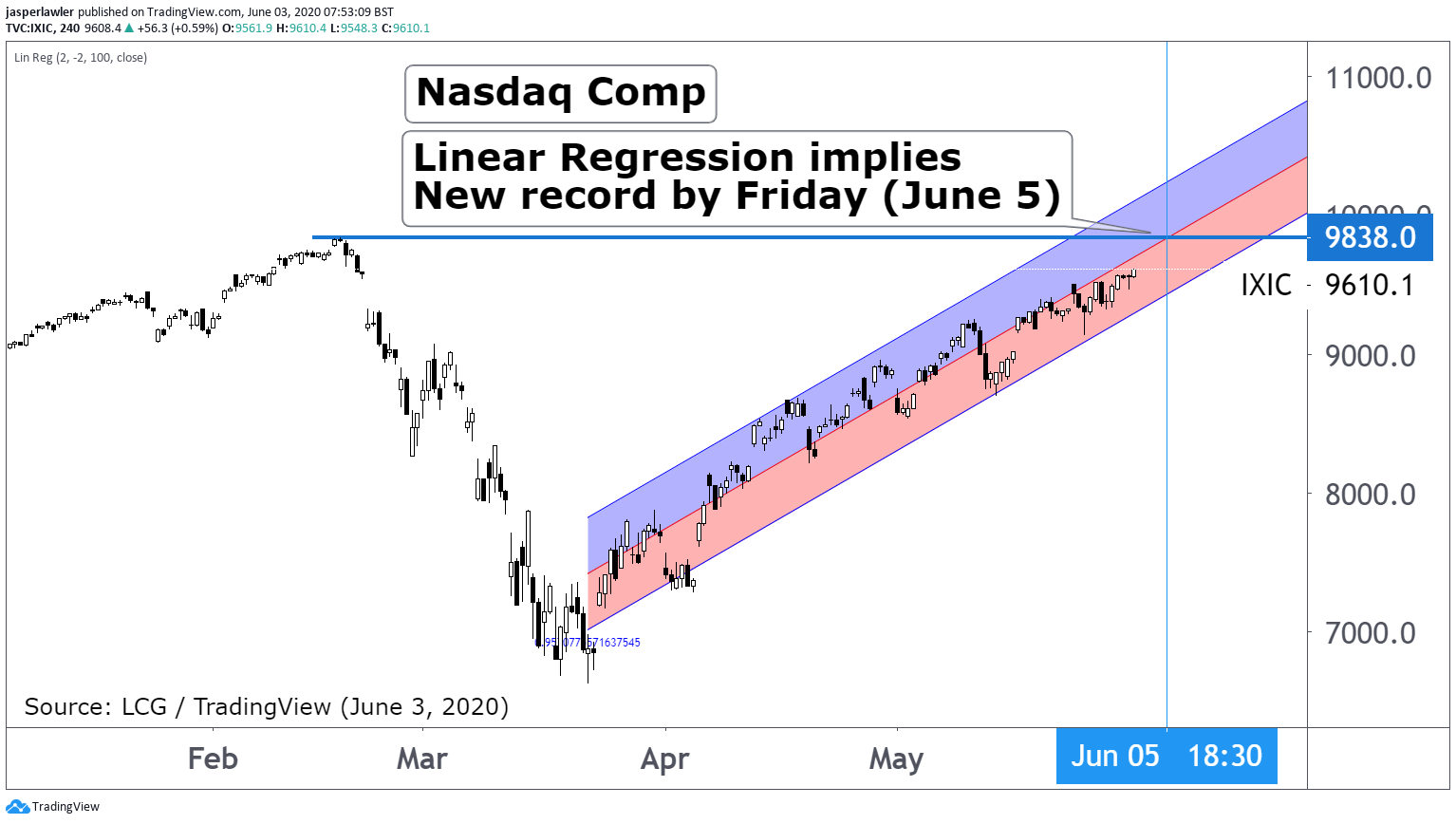 Linear Regression imposed on the rally since the March low implies a record high in the Nasdaq by Friday. Of course, the trend can still reverse – or just slowdown – but if it keeps the pace & direction of the last two months – we are close to a new record high.